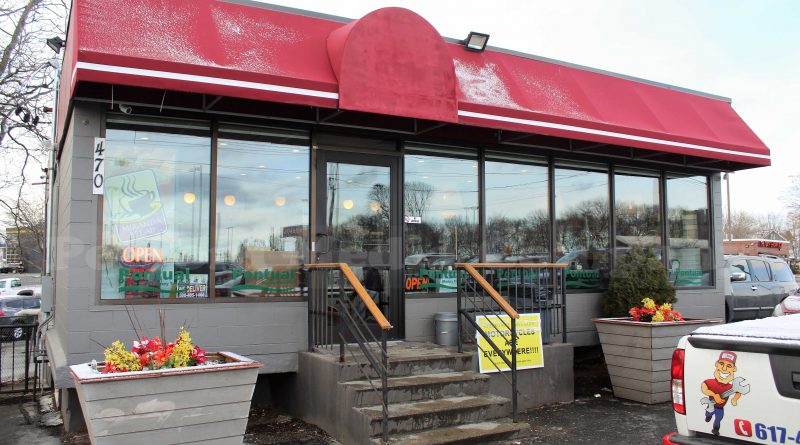 This was the Mayor’s sixth coffee hour this year, and her 16th since taking office on January 1 2018.

The Mayor’s office has advertised her coffee hours as a way for residents and business owners to discuss issues and ideas with the city’s first Mayor.

But Saturday’s coffee was not accessible to all. The small business, while compliant with the city’s code and rules, was not handicap accessible.

The Mayor’s spokesperson said the Mayor was “not aware” the location at 470 Waverly Street was not accessible to all.

The Americans with Disabilities Act (ADA) requires restaurants to be handicapped accessible. However, restaurants that opened for first occupancy before the 1990 act, do not have to be fully accessible, under federal law.

The only way into Saturday’s small business, which offers delicious breads and desserts, food, and coffee was to climb four concrete stairs.

That meant, that anyone with a wheel chair would not have access to the Mayor.

“To hold a coffee hour at an inaccessible location is shocking, sad and disappointing especially when the Mayor speaks about diversity and inclusion for all,” said the chair of the Framingham Disability Commission Karen Dempsey.

The disabled are a protected class of citizens under the U.S. Department of Justice’s Civil Rights Division, just like gender, race, religion, ethnicity, and sexual orientation.

This was the first time the Mayor had selected a location that was not accessible to all.

The Mayor has held coffees at Sofa Cafe, the Saxonville Mills Cafe, B Sisters Cafe, all of which are accessible to all individuals.

“The Civil Rights of all people including people with disabilities must be a forethought and not an afterthought,” said Dempsey. “Not only is it the law but more importantly it is the right thing to do.”

Earlier this month, the Mayor hosted a community conversation on equity and inclusion. One of the speakers was Susie Santone of the Framingham Disability Commission, who spoke on the importance of access for all.

The Mayor’s spokesperson said the “Mayor likes to mix up the locations, preferring locally-owned shops,” when selecting a place for her coffee hours outside City Hall.