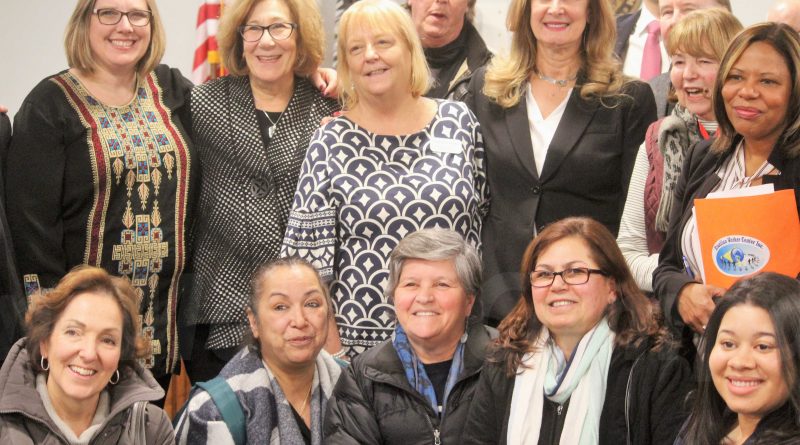 FRAMINGHAM – The Framingham City Council unanimously voted to create a task force that would write an ordinance to support immigrants in the city.

The vote was 9-0, with District 6 Councilor Mike Rossi and District 9 Councilor Edgardo Torres not present at the meeting.

Proposed by District 7 City Councilor Margareth Shepard, the vote creates a task force, to be chaired by Framingham Mayor Yvonne Spicer. Members of the task force would also include three Councilors, a member of the School Committee, a representative of the police department, a member MetroWest Legal Services, and two residents to be appointed by the Mayor.

At-Large City Councilor George P. King Jr. agreed as he said having the Mayor lead the task force would show the “community’s commitment to the issue.”

Shepard, who was the first person to announce a run for City Councilor when Framingham became a City, was elected in 2017. She said she is sometimes called the “immigrant Councilor” or the “Brazilian Councilor” but that she wants the city to work together to help immigrants, both documents and undocumented.

In 1992, Shepard made Framingham her home, She said when she came from Brazil to Massachusetts, she spoke no English. She now owns her own company, Golden Cleaners.

Shepard said the “welcoming” ordinance is needed “to increase immigrant participation in the 2020 Census, we need to create a positive and safe environment to encourage higher rates of response to this national survey.”

She said that “85 percent of the businesses in Downtown Framingham are owned by immigrant entrepreneurs who greatly contribute to the city’s economy.”

Shepard had a lot of support for her ordinance in the audience Tuesday night and many spoke before the City Council in favor of creating a task force.

State Rep, Maria Robinson spoke in favor of the task force. She said that her fellow Framingham state representatives Jack Patrick Lewis and Carmine Gentile were also in favor.

“Recognizing the significant role that immigrants play in the City of Framingham, and in our districts, we strongly support the creation of this task force to explore and investigate issues our immigrant community faces,” said Rep. Robinson.

She said at the state level, they are working on legislation that would tell immigrants they are “safe and welcome in Massachusetts.”

“With the 2020 census nearing, it is imperative that Framingham is accurately represented,” said Rep. Robinson. “Our fear is that our immigrant community may not participate due to concerns about their legal status.”

The census is intended to count residents, regardless of their status, said Rep. Robinson.

“Both federal and state funding for the City relies heavily on census data,” said Rep. Robinson. “any by not having an accurate population count from the census, our city will suffer, by being under resourced.”

District 3 Councilor Adam Steiner said it was the Council’s fiscal responsibility to make sure that every resident gets counted in the census.

Framingham is home to one of the largest populations of Brazilian immigrants in the United States.

Lois Josimovich, with the Massachusetts Alliance of Portuguese Speakers, which has an office in Framingham, also spoke in favor.

It is estimated at more than 5,000 individuals. But Framingham is also home to immigrants from eastern Europe, Asia, Central America, etc. too.

Councilor Steiner commended Councilor Shepard for bringing the proposal to the Council considering the hatred directed at her and at the immigrant community by some.

“First we have an ethical responsibility,” said Steiner. “Creating a task force is the least we can do, and craft a welcoming ordinance that will mean something.”

“Councilor Shepard’s proposal to form a diverse Task Force, made up by
representatives of all segments of the political and civil society, is a great opportunity for people to come together and reflect on the real meaning of being Welcome,” said Heloisa Maria Galvão, with the Brazilian Women’s Group, which is celebrating its 25th anniversary this year. “The Welcoming Ordinance will send a strong message to all residents of the City at a
time when people feel disenfranchised and need reassurance that their civil rights have not been overridden.”

Chair of the MetroWest Commission on the Status of Women Heather Panahi said the task force and the ordinance is needed as undocumented woman are “more vulnerable to domestic assault and economic
inequality.”

St. Tarcisius Parish Pastor Rev. Volmar Scaravelli said “We, the City of Framingham, can become a model of human kindness where all immigrants are welcome. He said we “all smile in the same language.”

District 8 resident Gen Greci spoke in favor of the task force, too. She is the Framingham Public Schools bilingual administrator. She said the district has more than 2,100 students for whom, English is not their first language, and that more than 75 languages are spoken by students in the district.

She said this is a “first step by the City in creating a safe and welcoming environment.” She said “all immigrants deserve the right to live harmoniously.”

Framingham Public Schools and Superintendent Bob Tremblay has been very supportive of the immigrant population in the school district.

In September 2017, after a federal immigration ruling, Tremblay issued a memo to families which said ” I would like to reassure you that the Framingham Public Schools value our diversity and stand with all of our families and staff in providing a welcoming and safe environment. Despite the termination of DACA, we abide by current federal law which states that all children are entitled to a free appropriate public education (FAPE) regardless of immigration status.”

Councilor Shepard said she had no “hidden agenda” in wanting to create the task force.

She said “immigrants often experience unique stresses, prejudice, and constant fear of family separation due to anti-immigration policies enforced by the federal government including
deportation.”

“Councilor Shepard’s proposal touches upon a deep concern with public safety. Washington policies toward immigrants and minorities in general do not protect all the people, to the contrary it drives people underground, undermine community trust in the authorities, and make them easier target to all kind of exploitation,” said Galvão.

Jim Pillsbury, speaking on behalf of the League of Women Voters in Framingham, said immigrants have helped weave the fabric of our nation” and that it was important to encourage them to participate in government.

Former Framingham Town Meeting member Joseph Rizoli spoke against the creation of a task force. He said Shepard’s proposal was asking the “City of Framingham to break federal law.”

“Mr. Rizoli does represent a point of view. Does he do it in a way that is offensive? You bet,” said At-Large City Councilor Cheryl Tully Stoll. “But Mr. Rizoli’s point of view is shared by other people. And until we are able to have people understand, other issues, and put themselves in other people’s shoes, we don’t have a chance of changing points of views, or making them a little more informed, or a little more educated. If we are going to take the step to move forward, with some kind of ordinance that makes people feel welcomed, then we need to make sure that we also educate folks on the other side of the spectrum, and include them in the discussion.”