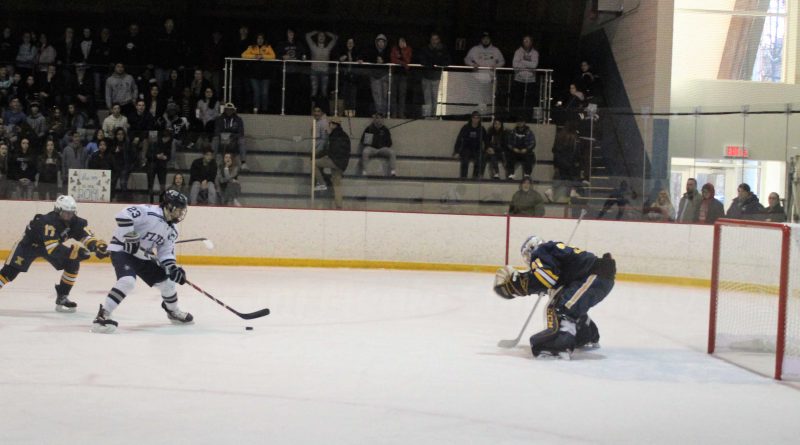 FRAMINGHAM – Led by senior captain Mike Tersoni, the Framingham Flyers, ranked #7 in the state, soared past the Xaverian Hawks, ranked #8 in the state yesterday at Loring Arena.

Tersoni, on senior night, scored four of the six goals.

“Mike is our best guy,” said head coach Will Ortiz about his team’s leading scorer after the game. “We lean on him heavily. We ask him to do a lot and we expect a lot from him.

Tersoni gave the Flyers the 3-2 lead in the first, when he came out on the ice just as a Framingham penalty was ending. Tersoni took a pass from Robbie Lopez, who had three assists in the game, and scored on a break away.

“This was a big game and big players show up in big games,” said Ortiz of his senior captain.

This was a big game, that has Super 8 implications. Saturday is selection day.

But the Xaverian game was one of just many big games on the Flyers schedule this season.

With two games left in the regular season, the Flyers are 15-3-2, and are Bay State Conference champions with an 11-0-1 record (Framingham tied with Needham.)

“We are playing playoff hockey every day,” said Ortiz, about his tough schedule. “We are going to get the best out of every opponent we face. I am confident with the guys we have in that locker room. We know what we need to do and how to execute our game plan.”

But Ortiz was not happy with the Flyers performance in the first period yesterday, despite the 3-2 lead headed into the locker room.

That “first period was one of the worst periods we have played all year,” said Ortiz after the game.

“We pride ourselves on our defensive zone coverage,” said Ortiz. So in the second period, “we made the necessary adjustments. We came out and dominated that second period. We out shot (Xaverian) 10-1. We held the 3-2 lead, and we knew we were in a dog fight that last period.”

“Our guys stuck to the game plan” in the final period, said Ortiz.

“Dominic Schiappa had a hell of a game,” said Ortiz about his senior goaltender. “He had some key saves down the stretch.”

Ortiz said Saturday’s game against the Xaverian Hawks was a “must win.”

“We knew we needed to win this game,” said Ortiz.

Ortiz said although his line of senior captain Nate Nichols, senior captain PJ Conzo, and Hunter Balducci did not score any points, they made a difference.

“Those guys worked hard in all three zones. They didn’t see the state line that much, but that is okay. In the end, it is a win. It’s a team effort,” said Ortiz.

Lopez, who ended the night, with three assists, drew praise from his coach.

“He made a lot of good plays tonight, and he was rewarded,” said Ortiz. “He has a skill set that a lot of kids wish they had. He sees the ice well. He has good stick skills, and has a good shot.”

Besides Tersoni. goals were scored by Will Trischetta and Jared Shimelman.

Framingham had to fight off a 6-on-3, after a couple of major penalties with 2:53 left in the game.

“I’m okay with those penalties,” said Ortiz. “There was a little scuffle, that’s hockey. It was okay, as I asked my guys to protect their goalie. They protected Dominic,” said Ortiz.

“We were lucky we didn’t get any DQs. We had a couple of majors. We still have everybody for Tuesday,” said Ortiz.

Next up for the Flyers is their annual trip to the Ice Palace in Burlington. They will play host Burlington High at 8 p.m. on Tuesday.