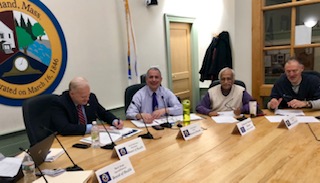 ASHLAND – The Ashland Board of Health signed regulations banning the sale of mint, wintergreen, and menthol tobacco and e-cigarettes.

In 2011, the The U.S. Federal Drug Administration conducted a scientific review that concluded “that menthol cigarettes pose a public health risk above that seen with non-menthol cigarettes.”

In November 2018, the U.S. Food and Drug Administration (FDA) announced its intent to restrict the availability of flavored e-cigarettes, remove e-cigarette products marketed to children, and ban flavored cigars and menthol cigarettes.

“Too many lives have been cut short by the dangers of tobacco, and with the drastic increase in youth e-cigarette use, it is past time for the FDA to use all of the authorities provided by Congress to protect the public’s health against this deadly menace,” said Senator Markey, in a statement in November following the FDA announcement. ““This is particularly true for menthol cigarettes, and the FDA’s ban on menthol cigarettes will prevent a new generation of tobacco users and help save lives.”

In December 2018, the Ashland Board of Health announced its intention to ban menthol and mint tobacco products. A public hearing was held on January 15, 2019.