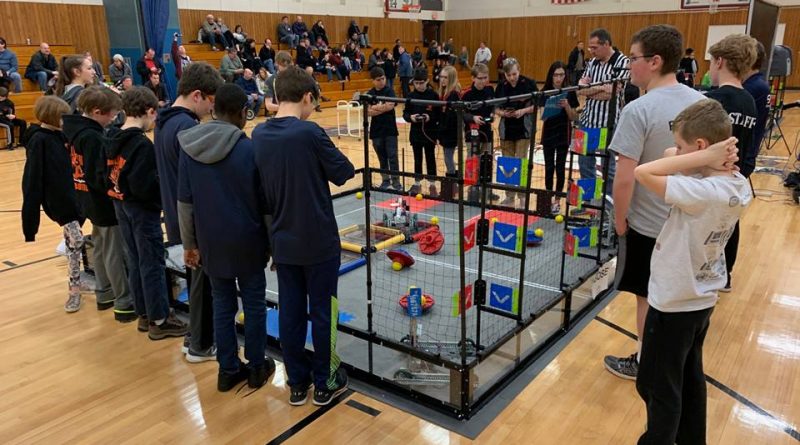 FRAMINGHAM – A team from Walsh Middle School is moving on to the VEX Robotics ‘Turning Point’ regional championships on February 23.

Framingham Public Schools had four teams that competed on Saturday.
The competition required middle and high school students to execute the 2018-2019 VEX Robotics Competition game, Turning Point, which is played by stacking caps on posts, by flipping caps, by stacking balls on caps, by toggling flags by throwing balls.

Students have been designing, building, programming, and testing their robots ever since the game was revealed last April.

As part of the Framingham Public Schools after school program, students meet multiple times a week to work on their robot. Teams can also bring the robots home to perfect their build and programming.

As Tournament Champions recipients, the team 9791B has qualified for the Southern New England Middle School Regional Champions, extending their journey as they seek to qualify and compete in the VEX Robotics World Championship.

“I am proud of these students for their persistent problem solving in designing, building and programming their robot,” said Pascal Chesnais, advisor to the WalshBots. “They brought consistency to the competition field, great sportsmanship, and the results show it. I look forward to watching them iterate their design between now and regional championship where I expect them to shine.”

This is the third year the CamCats team 5948A has competed for Cameron Middle School. The team’s original participants are 8th graders Nilufar Noorian and Lena Ocain and, new to the team this year, is 6th grader Zeybek Tezduyar.

For the past two year, the Cameron team has traveled to Walsh Middle School in the afternoon to work with the Walsh teams in Walsh’s Robotics Lab.

But this year, Cameron is working in the newly-created makerspace.

Angie Goldberg, the CamCats’ advisor said, “Our experience working at Walsh has helped this team build the knowledge and confidence needed to work on their own. We are still able to draw on the resources and expertise of Walsh when needed and truly appreciate all the support from their club and also the club at FHS.”