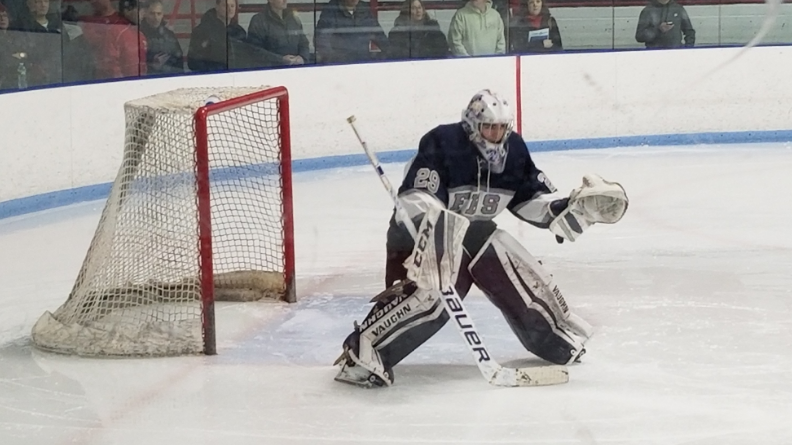 NATCK – The Flyers boys hockey team went into Natick, and skated away with their seventh win of the season, winning 4-0.

The Flyers started applying the pressure early, scoring two quick goals in the first period, one coming from senior forward Nate Nichols, and the other from fellow senior forward and captain Mike Tersoni.

In the second period, the Flyers continued to keep their foot on the gas, and came at Natick with continued pressure. They would score once in the period, coming off the stick of senior forward Brian Tosi.

One more goal would be added in the third with Tersoni finding the back of the net again to complete the Flyers shut out, during rival weekend.

Another key to the win was the stellar play by the Framingham goalies. Junior Jake Handy and senior Dominic Schiappa combined to go a perfect 26/26 in save chances.

After his 3-point night (1 goal and 2 assists), Tosi expressed his satisfaction with the team’s effort.

“I really feel like they key to this was that we built off of each other. One guy would make a play and set up another. When that’s happening, that’s when we play the best,” he said.

Head coach William Ortiz also was very pleased with his team’s performance. He credited his team with staying focused.

“We try to come in to every game knowing that there’s two points out there for us to take. Our job is to stay focused on getting them,” said Ortiz.

Ortiz also noted the win was a very big one given the opponent.

The win moves Framingham to 7-2-1 on the season.

And the Flyers are undefeated in Bay State Conference play at 5-0.