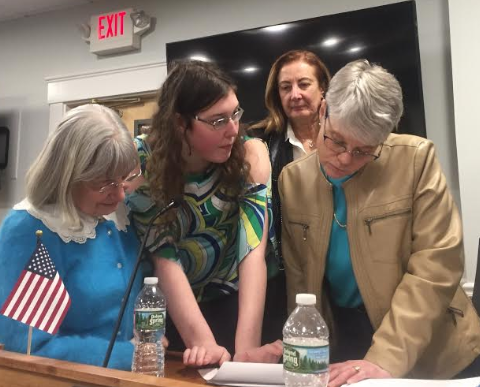 FRAMINGHAM – A Framingham High senior researched and authored an ordinance requesting the Framingham City Council create a Youth Advisory Council for the City of Framingham.

Isabella Petroni, 17, submitted the ordinance to the 11-member City Council at its Tuesday night, January 8 meeting, as part of public participation.

“I have come up here as a citizen and a representative of the youth of this community,” said Petroni. “Local government is imperative to the functioning of everyday life. Yet, we forget to teach the next generation about how to prepare for that.”

“If they take a government class they will focus mostly on the federal government, and sometimes our state government. Town and city governments are rarely touched upon. But when they are, the minimum basics are discussed. Most of the information given is broad generalizations when each community is unique in its inner workings,” said the high school senior, taking an AP Government class this year.

“As a member of the next generation and someone who has been involved in local politics from an early age, I understand the importance of this,” said Petroni, who lives in District 8. “But, others my age are looking for the chance to engage in this small but important form of government to both learn and to have a voice. That’s why I propose the idea of having a youth council for the City of Framingham. We already have a council on aging to discuss the important topics concerning our city’s elderly. So, we should have a council made up of our city’s youth in order to discuss important issues to us.”

Petroni explained she researched youth councils in Massachusetts and across America, created by City Councils. After reading several ordinances around the United States, she wrote her ordinance over the holiday break.

The ordinance submitted by Petroni is only the second one submitted by a citizen since Framingham became a City on January 1, 2018.

The proposed citizen ordinance is on the City Council’s agenda for January 16. The Council will be asked to refer the proposal to the education subcommittee to vet it and make a recommendation for the full 11-member Council.

Petroni’s proposed Youth Council would be comprised of 13 individuals.

“Members will be Framingham residents, with priority given to individuals enrolled at Framingham High School, Keefe Technical High School, Massachusetts Bay Community College, and Framingham State University,” wrote Petroni. “Students,who attend high schools outside of Framingham may apply, but students must live in Framingham and not board in another community. All members must be between the ages of 13 and 22, and still be enrolled in a high school, college, or university.”

Each of the 9 district City Councilors would nominate one student from their respective district, with a majority vote of the 11-member Framingham City Council needed for approval.

“The remaining 4 members of the Youth Council will be members-at-large appointed by the Mayor from each of these four schools – FHS, Keefe Tech, MassBay and FSU. Each nominee must live in Framingham … or a dorm at Framingham State. A majority vote of the City Council is needed to approve all four nominees,” wrote Petroni.

Petroni, in her proposed ordinance, had the following duties for the Youth Council:

a. Evaluating and reviewing problems facing youth in the City

b. Representing the voices of youth in the City of Framingham, and advising elected officials and other policy makers about issues affecting and of interest to youth.

c. Providing leadership and representing the diverse needs and goals of young people in the City of Framingham

d. Serving as a bridge to connect the public entities including the the mayor, municipal government, police, school districts, and high education institutions, to support young people in the City of Framingham

e. Providing a structure for youths to learn the value of civic participation and thereby creating lifelong invested citizens.

g. Providing outreach to Framingham teens and young adults informing them of existing opportunities and listening to suggestions on how the community can improve youth- oriented efforts.

h. Providing input on community issues coming before the City Council and the School Committee of the City of Framingham.

‘The youth of our City are a valuable resource who should be heard from and included in government,” said Petroni, who wants to study environmental policy in college.