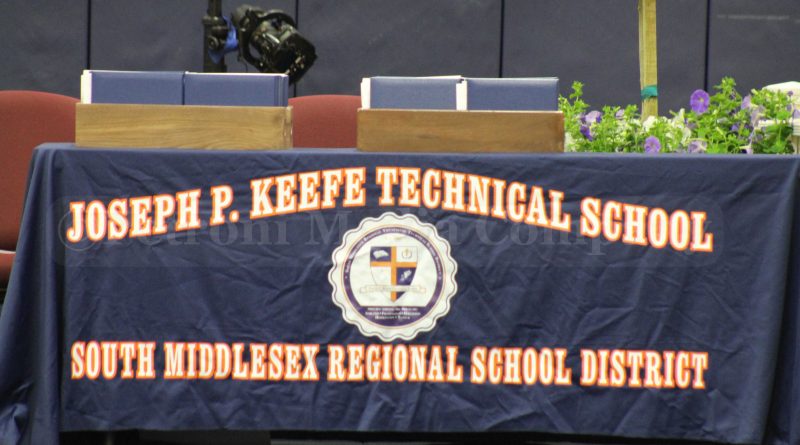 The City Council approved the two women by a vote of 10-1.

District 4 City Councilor Mike Cannon voted against the appointments, after expressing disappointment that no one from the mayor’s office interviewed either candidate before the Mayor submitted the names months after the applicants applied.

“I was contacted by Adrienne Bogusky from Keefe Tech asking if I would be interested in being on the KT School Committee. I am interested. She told me to reach out to your office to find out what I need to do to become a representative. I am a Framingham resident. My son graduated from Keefe in 2018. I am also a teacher in town. I’m an early educator at Framingham Centre Nursery School,” wrote Burns to the Mayor.

” I was informed by Adrienne Bogusky that there is a Framingham seat open on the School Committee to represent Keefe Tech and I am very much interested in becoming involved with the school community,” wrote Martinez.

Chair of the City Council’s subcommittee on appointments Cheryl Tully Stoll said on Tuesday night, the Council had been requesting a resume for Martinez since December and finally received it on Tuesday, January 8, the night of the vote.

“I think it is imperative we give serious consideration to these two individuals, for this interim period” said Tully Stoll.

The at-large City Councilor hoped that the Mayor’s office would better advertise these Keefe Technical openings next time around.

“A lot of people didn’t know about the openings,” said Tully Stoll. Which is why we only have two people for two spots, and one of them we didn’t even have a resume.”

Tull Stoll said in the future that boards like a School Committee should be more thoroughly vetted by the Mayor’s office and the City Council, but that the Keefe Technical School Committee needs new members now, as they are down four members.

District 2 City Councilor Pam Richardson said she was uncomfortable approving when the subcommittee did not have a chance to vet the candidates.

With a 30-day deadline looming over the City Council, they only had a couple of choices Tuesday night.

2. Reject the candidates submitted by the Mayor.

3. Take no action, and by default the two candidates would automatically become members of the School Committee, 30 days from Dec. 12, 2018.

District 6 City Councilor Mike Rossi, who also serves on the Keefe Technical School Committee said “I am of the opinion this should have been a more open process.”

“But given the point that the Keefe Board is at a challenge for its quorum,” Rossi said he was “comfortable with allowing them to serve.”

“Once their term expires in April, they could continue to serve until new appointments are made,” added Giombetti.

District 8 City Councilor Judy Grove said she was impressed that the two individual were still willing to serve, as it appears the Mayor’s office lost or misplaced the applications, which came in September.

“I think we should give them consideration, since they are still there for us,” said Grove.

“We need a much better process,” said Grove.

Tull Stoll said the appointment subcommittee is working on an ordinance that would require a much more “transparent process” with appointments.

“i know one of the resignations came in August, and the applications came in September, so this has been lingering for a while,” in the Mayor’s office said Cannon.

Cannon said a School Committee candidate should have been interviewed by someone before they were submitted for appointment.

Kezer told Council there was communication between the Mayor’s staff and the candidates but no interviews. He said staff contacted one of the candidates for the resume recently.

Kezer said boards and commission like planning, zoning, license, etc had panels, and a much more “robust process” including interviews but not for School Committee.

Keefe Technical School Committee members are responsible for a budget for the regional school district and were elected by the people, when Framingham was a Town.

“When they were elected, it was the most public vetting process ever,” said Cannon. “I would hope going forward the process would be more comprehensive.”

Cannon suggested the Mayor’s office notify the Council when there are resignations. He said he only learned of the August resignation last month.

“This was advertised along with many other appointments, going back to April, May,” responded Kezer to Cannon.

Giombetti said he met with the Mayor and Kezer that morning and expressed the importance of this School Committe, where more than 65 percent of the students are from Framingham. The regional school district is comprised of Framingham, Natick, Ashland, Holliston, and Hopkinton.

The Chair said the Keefe Technical School Committee is a “significant role.”

“And because of the significance it should be a fully vetted position,” said Giombetti. “I told the Mayor, my hopes going forward that it would be a much different process.”

District 3 City Councilor Adam Steiner said he agreed with Giombetti and there needs to be a better process, but he was “impressed” with the resumes before him.

Steiner made the motion to accept the two nominations by the Mayor for the Keefe Technical School Committee. Grove seconded the motion. Vote again was 10-1.