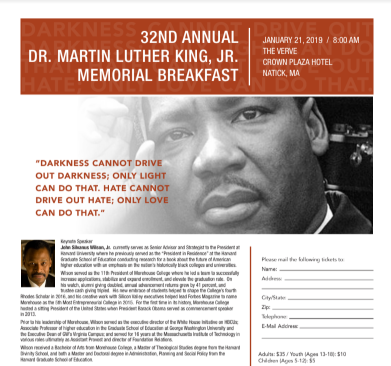 The event will be held at the Verve Crowne Plaza in Natick at 8 a.m.

The emcee for the event will be Phillip Martin, who is a senior investigative reporter for WGBH News and a contributing reporter for The World, a co-production of WGBH, the BBC and PRI; a program, which he helped develop as a senior producer in 1995.

Martin is a the recipient of the 2017 Society of Professional Journalists national Sigma Delta Chi award for Best Investigative Reporting and the 2014 national Edward R. Murrow Award for Best Investigative Reporting (large-market radio). He was part of a team of NPR reporters that earned a George Foster Peabody Award in 2002 for coverage of the September 11th terrorist attacks. He has received numerous other journalism and civic engagement honors over the course of his career, including a Pulitzer
Center for Crisis Reporting grant in 2018 for reporting on caste discrimination in India.

The keynote speaker for the event will be John Silvanus Wilson, Jr., who currently serves as senior advisor and strategist to the President at
Harvard University where he previously served as the “President in Residence” at the Harvard Graduate School of Education conducting research for a book about the future of American higher education with an emphasis on the nation’s historically black colleges and universities.

Wilson served as the 11th President of Morehouse College where he led a team to successfully increase applications, stabilize and expand enrollment, and elevate the graduation rate.

On his watch, alumni giving doubled, annual advancement returns grew by 41 percent, and trustee cash giving tripled. His new embrace of students helped to shape the College’s fourth Rhodes Scholar in 2016, and his creative work with Silicon Valley executives helped lead Forbes Magazine to name Morehouse as the 5th Most Entrepreneurial College in 2015.

For the first time in its history, Morehouse College hosted a sitting President of the United States when President Barack Obama served as commencement speaker in 2013.

Prior to his leadership of Morehouse, Wilson served as the executive director of the White House Initiative on HBCUs; Associate Professor of higher education in the Graduate School of Education at George Washington University and the Executive Dean of GW’s Virginia Campus; and served for 16 years at the Massachusetts Institute of Technology in
various roles ultimately as Assistant Provost and director of Foundation Relations.

Wilson received a Bachelor of Arts from Morehouse College, a Master of Theological Studies degree from the Harvard Divinity School, and both a Master and Doctoral degree in Administration, Planning and Social Policy from the Harvard Graduate School of Education.