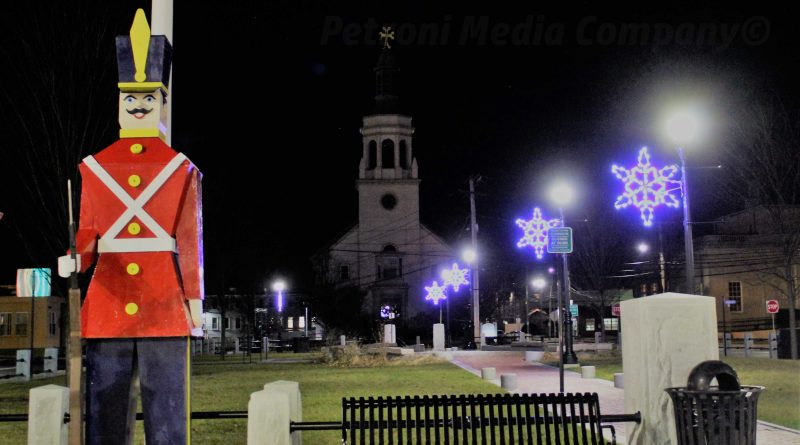 FRAMINGHAM – The old Shoppers World in Framingham was a joyous place during Christmas. Between Jordan March and the cinema, stood 24 wooden soldiers.

The originals were hand-crafted by the Shoppers World maintenance worker and woodworker Hal Purrington.

But soon the wooden soldiers re-appeared in Framingham.

The Carpenters Union was asked to help build new soldiers for the Town of Framingham.

About 10 years ago, around six to eight carpenters worked on building seven new soldiers at the recreation departments work shop, according to Charley Ryan, the business representative for Carpenters Local 336.

“The person who first built them had all the plans in his head,” said Ryan. “Volunteers from the carpenters union had to take one soldier apart to see how it was made. Carpenters found out there were 150 parts to be made for the soldier.”

“All  parts were different angles ,exterior parts were painted on all sides and soldiers came in two parts . It was a two month process ,” said Ryan. “After completed  the Town had seven new soldiers to put in different parts of Framingham that had not stood there before.”

This year, the City of Framingham Parks & Recreations had more soldiers made and there were 26 soldiers placed in 21 locations in 2018.

For the past couple of years, the Parks & Recreation Department has posted clues to where the soldiers were on their social media accounts.

This year, the soldiers were located at:

Clue #1 – Built in 2010, this building sits in the shadows of buses. During lunch, its workers can walk over to “The Coolest Place in Town” to take a couple of laps or score some goals before returning back to work. – FRAMINGHAM PARKS & RECREATION MAINTENANCE & OPERATIONS BUILDING = 1 Soldier
—————
CLUE #2 – Sold to the highest bidder! Visit here, with money in hand, to pick up four wheels and a running board! – ADESSA = 1 Soldier
—————
CLUE # 3 – Catch a band, read poetry, or admire the artwork. Once upon a time, the only thing you would hear coming from this building would be sirens. – AMAZING THINGS ARTS CENTER = 1 Soldier

—————
CLUE #4 – This newly renovated site, on the East side of Farm Pond, next to a former Nipmuck burial ground, was originally set aside to be used as a public park and meeting area. During the 1890’s an archway had been built, so that it could be seen by the passing Soldiers heading to the train. It had read “God be with you till we meet again.” People still gather at this small park today. – DOWNTOWN COMMON = 1 Soldier
—————
CLUE #5 – A disaster on January 28, 1986 launched this teacher into National Hero status. This newly erected building proudly displays her name. – MCAULIFFE LIBRARY = 1 Soldier
—————
CLUE #6 – You hit the nail in the head! This family business has been operating since 1874! It is a staple, shovel, or even a bolt in the Saxonville section of Town. – ROBINSON’S HARDWARE = 1 Soldier
—————
CLUE #7 – Visit this institution, located just South of Route 9, on one of the Town’s busiest (North/South) routes, for excellent service, some personalized support, or to make a deposit! – MUTUAL ONE BANK = 2 Soldiers
—————
CLUE #8- Located in the ‘Tripoli’ section of town, this petite building serves as a community-centered method of patrolling public safety. – FRAMINGHAM POLICE SUB-STATION = 1 Soldier
—————
CLUE #9- Known as “Mr. Framingham”, this person has a State Park as well as THIS building named after him. – CALLAHAN SENIOR CENTER = 1 Soldier
—————
CLUE #10- In a former life, this Nobscot building served as a home for safety deposit boxes as well as cold, hard cash. Today, it has succumbed to the times and is empty, just like the majority of the plaza across the street. – RUSSO’S OLD BANK BUILDING = 1 Soldier

—————
CLUE #11- This site was the home to a state-of-the-art Medical Hospital named after a pioneer in Neurosurgery. It had a stand-alone Chapel, fifty-six wards, operating rooms, and over 3 miles of corridors connecting all of it! The site was once quoted to be “a city of mercy under one roof.” Today, this location, offers passive recreation to the community. – CUSHING MEMORIAL PARK = 2 Soldiers
—————
CLUE #12- This building is a memorial that was dedicated in February 1928 “In honor of our citizens who served in the nation’s wars and to the welfare of all of our people.” – FRAMINGHAM MEMORIAL BUILDING = 2 Soldiers
—————
CLUE #13- This building, dedicated in 1873 as a memorial to Framingham’s Civil War Soldiers and Sailors, once housed thousands of books. Today, it is the home to the Framingham Historical Society. – FRAMINGHAM HISTORICAL SOCIETY = 1 Soldier
—————
CLUE #14- Back in the day, you would come for petrol. Today, This building welcomes you into the Town’s historic old mill village of Saxonville. – ALBIE RUSSO’S OLD GAS STATION = 1 Soldier
—————
CLUE #15- come buy local goods, applaud a graduate, or catch some summertime tunes at this site. – FRAMINGHAM CENTRE COMMON FLAG POLE = 1 Soldier

—————
CLUE #16- Built on the old Agricultural Fairground, with a half-mile horse race track – you can now find people running on a quarter-mile track, hitting balls, and cheering on their favorite teams here! – BOWDITCH ATHLETIC FIELD = 2 Soldiers
—————
CLUE #17 – This local, family-owned and operated business will never fall “flat”! For over 40 years the community has never had to ‘fret’ with these highly educated and skilled professionals who have mastered their craft and are never ‘off-key’! – CENTRE MUSIC HOUSE = 1 Soldier
—————
CLUE #18 – This is not a place for being dull! You must be sharp, and sometimes, on your toes! In the past, this location served as the home for the ‘Pics’ and hosted car shows, craft fairs, and even the Circus! Today, this old soul has a new look! – LORING ICE ARENA = 1 Soldier
—————
CLUE #19 – This institution moved to its present site located on ‘Bare Hill’ in 1853, was re-named in 2010, and celebrated its 175th Anniversary in 2014. – FRAMINGHAM STATE UNIVERSITY = 1 Soldier

—————
CLUE #20 – Owned & operated by the same family since it was built in the 1980’s, this structure, along with the ten businesses that were located inside was a total loss due to an early morning fire in March 2017. – OLD PATH VILLAGE SHOPPING CENTER = 1 Soldier
—————
CLUE #21 – Located on the south side of the city in the shadows of MCI Framingham, residents call this location with questions in regards to street sweeping, sidewalk maintenance, roadway repairs. – FRAMINGHAM DEPARTMENT OF PUBLIC WORKS HIGHWAY DEPARTMENT = 2 Soldiers