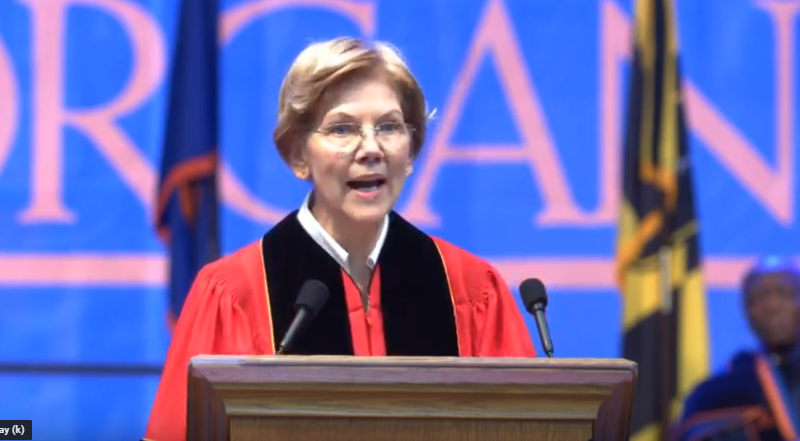 In her remarks to nearly 500 students graduating from the largest of Maryland’s Historically Black Colleges and Universities, Senator Warren discussed the importance of changing the rules so that everyone gets a fair shot at building a future.

The full text of her remarks, as prepared for the Baltimore speaking engagement is below.

Thank you President Wilson. Thank you Board of Trustees.

And I want to take a moment to thank a champion and fearless leader in the fight for social, economic and racial justice for being with us today. Your Congressman, and my dear friend and long-time partner in so many fights, Congressman Elijah Cummings.

This iconic place is a shining example of what HBCU’s have embodied in this country for over one hundred years – institutions that cultivate leaders who fight for equality, justice and opportunity.  It is my honor to be here with you.

Morgan State University – what a great motto you have. “Growing the future, Leading the World.”

That’s a lot of pressure to put on you guys.  Especially right now.  Especially when some of you may have partied too hard last night.

I see you back there-already nodding off.  Probably should have had one more cup of coffee this morning.

I know what graduation speeches are supposed to be-short and forgettable.  But I’m here to pay respect to you for this honorary degree, here to say something that I hope will stick with some of you for a while.  I’ll do my best to keep it short.

I want to tell you a story.

I grew up out in Oklahoma. My daddy worked a lot of different jobs.  He ended up as a janitor.  He and my mom had three boys who all eventually went to serve in the military.  And then there was me.  The late-in-life baby.  The surprise.

When this story starts, it was just the three of us left.  Dad at work.  Mom at home. Me in junior high.

Then, Daddy had a heart attack. He survived, but even after he got out of the hospital, he couldn’t go back to work.  The bills piled up.  We lost our family station wagon.  Late at night, after I was in bed, my mom would close the door, but I could hear my parents talk. I learned new words, words like mortgage and foreclosure.  Heavy words.

She was fifty years old.  She’d never had a regular job-and she was scared.  Scared and crying. But she put on that dress and walked down to the Sears and got a minimum wage job.  That job saved our home-and it saved our family.

When I was a little girl, minimum wage was enough to cover the basics for a family of three.  Today, a full-time minimum wage doesn’t pay the rent on a median two-bedroom apartment in any state in America.  That same kind of job that saved my family fifty years ago wouldn’t even keep a mama and her baby out of poverty today.

So what happened? I’ll tell you what happened: Washington changed the rules. When I was a little girl, the guys in Washington set the minimum wage based on what it would take to support a family-a family like mine. Today, the people who set the rules worry more about Walmart’s profits than they do about how any small family will survive.

Sure, life is about grit-hard work matters.  But the rules matter too.  And a mama who works her heart out today at minimum wage-a mama who works every bit as hard as my mama did-is stuck with a set of rules that are rigged against her, and those rules are set by a bunch of politicians in Washington who sure aren’t looking out for her.

Hard work matters, but the rules matter too.

When I think about our house, I also think about how the rules set in Washington could have dictated an entirely different story for a family that wasn’t white.

So let me tell you one more story.  It’s also a story about rules.

Here you sit at graduation.  A lot of you are moving-right now.  And a lot of you will think about owning homes someday not too far out.

Houses are important. Sure it’s a place to mount your diploma, or paint a whole bedroom blue and orange. But homes also matter for hard core economic reasons. As people pay off their mortgages, they build real wealth.  The number one retirement plan in America is pay off your home and live on Social Security.

And, if grandma can hang on to the house until she dies, she passes that house-that wealth that it represents-to the next generation.  This is how wave after wave of families have not only taken care of themselves, it’s also how their children have done steadily better.  At least, that’s how it’s worked for tens of millions of white families.  For black families, it was different.

Look at the rules. In 1935, the federal government started subsidizing home mortgages, making it easier for working families to buy homes and build wealth.  But not for everyone.

As part of the FHA program, the federal government officially adopted a policy of redlining, a practice that effectively denied home mortgages to families of color, and that meant they didn’t get the same chance to build wealth or to pass wealth down to their kids.  The results?  By the early 1960s, for every dollar of wealth the average white family had, a non-white family had less than 15 cents.

Finally, during the 1960s, redlining was banned. And over the next twenty-five years or so, black families started building more wealth. The black-white wealth gap began to shrink. And that might have been the end of the story.

But in the 1990s, as more black families were buying homes and building wealth, big banks and sleazy mortgage lenders saw an opportunity. They targeted communities of color for the worst of the worst mortgages. And bank regulators, the guys who are supposed to work for the American people, looked the other way.  The results were catastrophic.  *Black homeownership rates are now lower than they were when housing discrimination was legal. Today, the black-white wealth gap is bigger than it was back in the 1960s.

Sure, there’s a lot more going on-educational disparities, a broken criminal justice, access to credit.  I picked just one example-housing-but as a country, we need to stop pretending that the same doors open for everyone. Because they don’t.

I’m not a person of color. And I haven’t lived your life or experienced anything like the subtle prejudice, or more overt harm, that you may have experienced just because of the color of your skin.  Rules matter, and our government-not just individuals within the government, but the government itself-has systematically discriminated against Black people in this country.

Ultimately subprime mortgages spread far beyond communities of color, and it eventually wrecked our economy.

That’s how a rigged system works. And that’s what we need to change.

So this brings me back to you.  Everyone will tell you to work hard.  Teachers.  Parents.  Coaches.  And I agree. Under the rules of commencement speakers I am required to say, “Work hard.”  And you should.

But I’m here with a bolder message:  It’s time to change the rules. Let me say that again for those in the back. Change. The. Rules.

Rules matter. And you have the power to make this country a more perfect union — make it the nation you want it to be.

The work will be hard. The rules didn’t rig themselves. People with power and influence rigged the rules to line their own pockets. And I’ll let you in on a secret, they plan on keeping it that way.

The rules are rigged because the rich and powerful have bought and paid for too many politicians. And if we dare to ask questions, they will try to divide us.

The rich and powerful want us pointing fingers at each other so we won’t notice they are getting richer and more powerful.

But here’s the deal:

In a democracy, what happens next is always up to us-you and me.  And there’s a lot more of us than there is of them.

As politicians try to turn us against each other, as they sell out to Wall Street, to big oil companies, big drug companies, and big student loan companies, as the President of the United States kisses up to autocrats and undermines voting and basic democratic institutions. Even in the midst of all of that, I look at you and I am optimistic.

You have power, real power.  And here’s how I know. Power has already shifted to you.

It starts with democracy.  This year the overall electorate was younger and more diverse than any midterm in recent history.  You are causing a much-needed earthquake in our political system.  And it’s not just at election time.  You are organizing-and you are changing America.

Even in the face of so much injustice and frustration and cynicism, the Class of 2018 is the most diverse, most vibrant, most hopeful generation of graduates our nation has ever known, the most engaged voters and volunteers, the most creative and determined activists.

I see it everywhere. People in the fight. Living legends of the civil rights movement partnering with high school kids to take to the streets.

People building alliances across every line, every barrier: women and men; married and single; gay, straight, and trans; rich and poor; urban and rural.

Most of all, people who never thought of themselves as activists are embracing their power, claiming their seats at the table and demanding change.

My mother worked hard-but the truth is that America gave her a chance to save our little family, and I’m grateful down to my toes for that opportunity. And I want everyone to have that same chance. I want this to be an America where hard work means real payoff, an America where the rules work the same for everyone.

That is the true promise of our democracy.  It’s a promise worth fighting for.

So here’s to you, the Class of 2018!  You are the future of America. I’m honored to fight alongside you.  Let’s make this a country that reflects our best values, the country that works for all of us. Thank you!