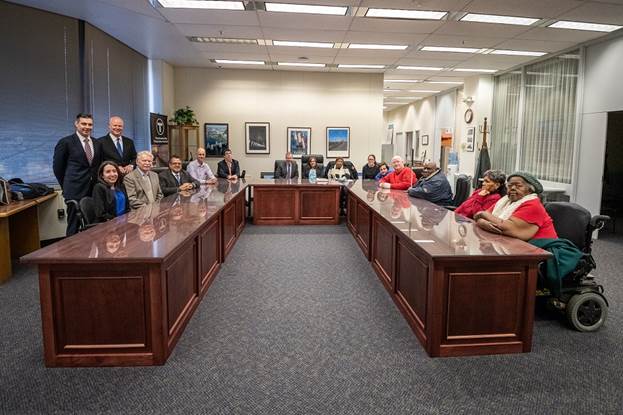 BOSTON – Yesterday, the MBTA and the Boston Center for Independent Living signed an Amended Settlement Agreement that sets forth updated achievable goals in the MBTA’s plan to bring about a more accessible transit system.

“While the MBTA is pleased to reach such an important milestone, we will continue to work with stakeholders to improve access to the T for people of all abilities through the Riders’ Transportation Access Group,” said MBTA General Manager Luis Manuel Ramírez. “In the years since the settlement has been reached, we have worked to make accessibility a fundamental part of the T’s culture by incorporating accessibility into the design of all of new projects, as well as addressing issues from our legacy infrastructure.”

Originally signed in April 2006, the MBTA/Boston Center for Independent Living (BCIL) Settlement Agreement called for sweeping improvements in the form of over 200 commitments and obligations to improve the MBTA’s fixed-route accessibility for people with disabilities.

Since the Settlement Agreement was entered into in 2006, the MBTA has worked collaboratively with the BCIL and the Independent Monitor, retired Judge Patrick King, in taking a systematic approach to address outstanding accessibility obligations.

Over a decade since the Settlement Agreement was entered into, many of these commitments have been fulfilled. Those commitments include the development of the MBTA’s Department of System-Wide Accessibility in 2007, new and more reliable elevators (fifty new elevators have been added to the system with ten more under construction and sixty additional elevators currently in design) with enhanced design standards, an entirely accessible bus fleet with updated bus operator training, and continued emergency preparedness.

With a continued commitment to a more accessible system, the MBTA has also proactively worked toward accessible initiatives beyond the scope of the Settlement Agreement, including technology pilots like the Digital Beacon Pilot as well as new priority seating signage with high-contrast colors, tactile lettering, multiple symbols, and clearer language to be installed across all modes. The T’s commitment also extends to the ongoing Wollaston Station Improvements, which, once complete, will make the Red Line 100 percent accessible.

The MBTA’s Plan for Accessible Transit Infrastructure (PATI) also continues the MBTA’s work toward a more accessible system by identifying and prioritizing repairs for accessibility barriers at all MBTA stops and stations.

Some remaining obligations, however, are in need of renewed attention. The original 2006 Settlement included several vague terms in which success was not defined and there was no clear path for identifying an obligation had been completed. Over the past two years, the MBTA and the BCIL have collaboratively worked together to clearly define these terms and best reflect the substantial progress that has been made since 2006. Fulfilled terms have been defined (specific elevator replacements, for example) as have currently fulfilled terms that will require ongoing monitoring (stop announcements onboard buses, for example). This Amended Settlement Agreement best reflects a shared vision between the BCIL and the MBTA in transforming the MBTA into a model transit system, accessible to people of all abilities.

Going forward, the process and timeline for evaluating and achieving the compliance of the Settlement’s remaining obligations will be streamlined with the MBTA directly submitting a report to Judge King every six months with terms that have been fulfilled. The BCIL have the opportunity to respond with Judge King ultimately evaluating and determining compliance. A new community engagement group, the Riders’ Transportation Access Group (R-TAG), will continue accessibility oversight after the Amended Settlement Agreement closes in the future.

Additional commitments are also currently underway and in various phases of completion. These commitments include, among others, ensuring that customers with non-apparent disabilities are granted requests for assistance, continued customer assistance at stations, addressing issues with alternative service if an elevator is unavailable, the development of accessibility design standards, and the installation of elevators directly connecting the Red and Orange Lines at Downtown Crossing, the first phase of which includes two new elevators servicing connections between the northbound Red Line and northbound Orange Line platforms anticipated to be substantially complete in January 2019.