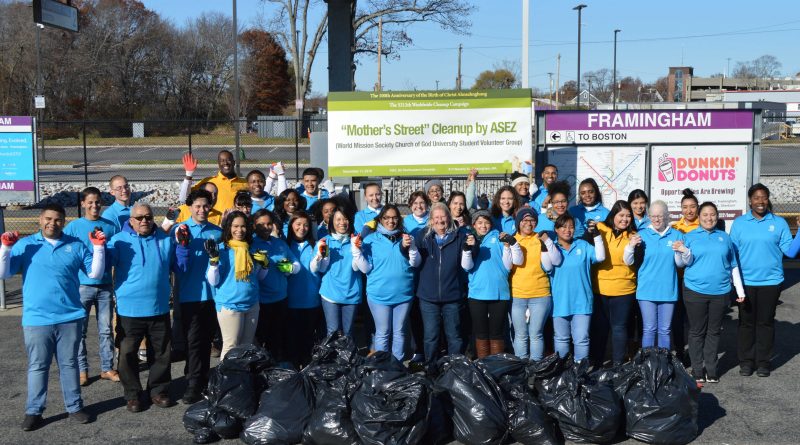 FRAMINGHAM—Today, about 40 ASEZ (Saving the Earth from A to Z) volunteers cleaned and spruced up Waverly Street and its surrounding areas starting from the Framingham train station on Waverly Street.

The volunteer group consisted of college students and members from the Church of God who are carrying out a worldwide movement entitled, “Reduce Crime Together,” during which ASEZ volunteers will clean up over 7,000 different regions and 800 universities.

Through this global initiative, the Church of God is moving towards fulfilling the United Nations Sustainable Goal #16 for peace, justice, and strong institution.

Framingham Park & Recreation department welcomed the volunteers, consisting of ASEZ members and students, and provided them with necessary supplies.

In total, the volunteers at the collected 22 bags of trash, 300 pounds.

“If the efforts of young adults from around the world who care about their neighbors and society can act as one, we would be able to maintain and share sustainable happiness and peace,” said Alex Lee from the Church of God. “According to the United Nations, sustainable development is impossible without peace. That is why the Church of God’s university students are focused on reducing crime and violence through small acts such as cleaning the parks and streets so that we can have peace and reach a sustainable future.”

ASEZ is carrying out the “Reduce Crime Together” project internationally.

Last week, on October 21, about 2,800 volunteers from a dozen countries, including Korea, Brazil, Malaysia, and the Philippines, participated in this movement.

On the East Coast, events took place in Connecticut, Washington, D.C., Florida, Maryland, New Jersey, New York, and Pennsylvania, with students from UCONN, Farleigh Dickinson University, Temple University, among many others. The movement will continue until the end of the year.

ASEZ, which means “Save the Earth from A to Z,” is an international volunteer group consisting of university student members of the World Mission Society Church of God. They organize and perform various community service activities in the 175 countries, where the church is located, with a vision to unite students around the world with one heart, and to make the future bright and happy for all seven billion people in the world by sharing Mother’s love, regardless of location, culture, or religion.

In August, Brazil President Michel Temer invited ASEZ students to an event at the presidential palace for the National Day of Volunteer Service. With more than 500 guests in attendance, President Temer thanked ASEZ for the group’s contribution to improving the quality of life of Brazilian citizens and cultivating a sense of community among people.

The World Mission Society Church of God is a faith-based, non-profit organization that strives to spread the love of Christ through beautiful deeds. Since its establishment in 1964, the Church of God has grown to more than 7,000 locations in more than 175 countries. For its contribution to the welfare of society, the Church of God has received numerous recognitions throughout the world, including the President’s Call to Service Award in the United States, the Presidential Citation in South Korea, and the Queen’s Award for Voluntary Service in the United Kingdom.

Photos and release submitted to Source