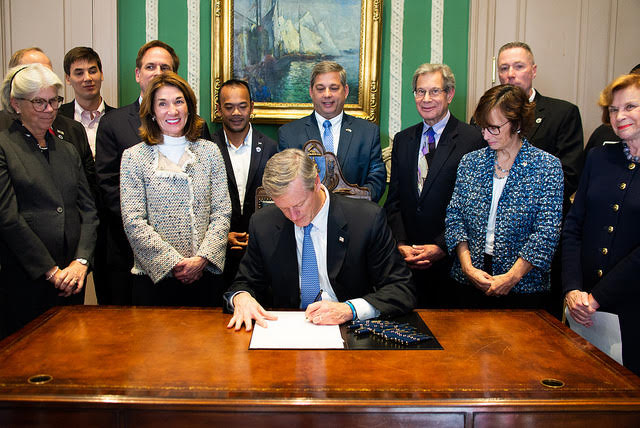 “Our administration is pleased to introduce new ways to strengthen civics education in the Commonwealth’s public schools by signing this bill into law,” said Governor Charlie Baker.“We are grateful to our partners in the Legislature for their willingness to work with us on ensuring a non-partisan process for students to pursue civics related opportunities.”

“Civics education is critically important for the future of our Commonwealth, our nation and our democracy,” said Senate President Karen E. Spilka (D-Ashland). “Many people, especially young people, are no longer content to sit on the sidelines while their futures are decided by others. Comprehensive civics education will equip our students with the tools they need to become the informed, active citizens our forefathers imagined when they created our systems of government.”

“The development of critical reasoning skills and discussions centered around varying points of views and ideas are important to the educational growth of students here in Massachusetts,” said Lt. Governor Karyn Polito. “We thank Senate President Emerita Chandler for her leadership on this legislation and look forward to working together to advance respectful civil discourse among students in Massachusetts classrooms.”

This new law will make it a requirement for Massachusetts public high schools and school districts serving eighth-grade students to provide at least one student-led, non-partisan civics project for each student.

These projects can be individual, small group, or class wide and they must be designed to promote student abilities related to the analysis of complex issues; consideration of different perspectives; logical reasoning with supportive evidence; engagement in civil discourse, and understanding of the connections between federal, state, and local policies, including those that may impact the student’s school or community.

Under the new law, a student who chooses not to participate in a particular group or class-wide project must be offered the opportunity to develop an individual civics project, with approval by the principal.

This bill also creates a Civics Project Trust Fund, which will be used to assist Massachusetts communities with implementing history and civics education state requirements, particularly in underserved communities. In addition, the Massachusetts Department of Elementary and Secondary Education (DESE), in consultation with the Secretary of State, will work to form a non-partisan high school voter challenge program to raise awareness for eligible students to register or pre-register to vote.

This bill will complement recent actions taken by the Board of Elementary and Secondary Education. In June, the Board voted to approve a revision of the History and Social Sciences curriculum framework, which will improve the impact of civics education across multiple grade levels and subject areas.

“Civics education is about both learning and doing, and effective civic engagement is not simply about advocacy or action, it’s about listening, questioning, respectful dialogue, and compromise,” said Massachusetts Education Secretary James Peyser. “In the end, civics should help our young people develop a love of our Commonwealth and our country and the democratic values they embody.”

“When we educate our children about civic responsibility from a young age, we foster an informed citizenship, a strong democracy and the development of our nation’s future leaders,” said House Speaker Robert DeLeo. “On behalf of students across the Commonwealth, I thank the Massachusetts Civic Learning Coalition and my colleagues in the Legislature – especially Chair Peisch, Rep. Campbell, Rep. Vargas and Senate President Emerita Chandler – for their work on this important issue.”

“I’m proud to see this important civics education bill signed into law,” said Senator Sonia Chang-Díaz (D-Boston), Senate Chair of the Joint Committee on Education. “In light of recent reports of voter suppression and the perilous state of our country’s civic and political life today, this legislation is especially critical. Civics education will help safeguard the torch of democracy for future generations and increase access to civic learning for children from historically disenfranchised communities. Thanks to Governor Baker, Senate and House Leadership, and the bipartisan, bicameral working group for getting this comprehensive bill to the finish line.”

“This bill ensures that all students throughout the Commonwealth will be exposed to robust civics curricula in order to prepare them to be informed and thoughtful participants in our democracy,” said Representative Alice Peisch (D-Norfolk), House Chair of the Joint Committee on Education. “This bill, in conjunction with the Department’s new History and Social Science Curriculum Framework and a new assessment aligned with these standards, are critical to preparing students for a lifetime of civic responsibility.”

“This newly enacted law could not have come at a better time. We are in a moment in our country when young people are seeing the power of their voices and are eager to participate in the civic process,” said Arielle Jennings, Massachusetts Executive Director of Generation Citizen and Co-Leader of the Massachusetts Civic Learning Coalition. “In order to prepare them, this law ensures they have real-world civic education opportunities that teach them not only the knowledge but the skills necessary to participate in our democracy.”

“Massachusetts has moved forward to a leadership role on civics education. This legislation will ensure that every student is ready for civic life. This is especially important at this time,” said Steven M. Rothstein the executive director of the John F. Kennedy Library and the cofounder of the Mass Civics Learning Coalition.

“Thanks to the Governor and the Legislature for enacting this legislation, the Commonwealth is once more demonstrating the importance of civic education and engagement not only in the classroom but in students’ communities as well,” said EMK Institute President Mary K. Grant, Ph.D. “It is crucial at this time in American history to have the curriculum strengthened across Massachusetts. The Kennedy Institute continues to work on increasing awareness and participation through programming with more than 20,000 students each academic year.”

“We are incredibly appreciative of the Governor and Legislature for their thoughtful prioritization to ensure that all young people in our state are encouraged to embrace a civics approach that involves learning both in and out of our classrooms,” said UTEC CEO Gregg Croteau. “UTEC also coordinates the Teens Leading The Way statewide coalition, in which its youth members have been championing this bill since its inception. Through the experiences of these young people, we have seen firsthand how such involvement can truly uplift their community engagement for the many decades ahead. That’s what this bill seems to be all about.”

“This bill shows that youth can play a direct role in government,” said Teens Lead the Way youth organizer Stephanie Bellapianta. “I am very proud of all the young people in TLTW who worked to advocate for this over the years and we are thankful to Governor Baker and the Legislature. We know that if given an opportunity to engage in the civic process, young people will rise to the occasion and become great citizens.”

Photo and release submitted to SOURCE by the Governor’s office.