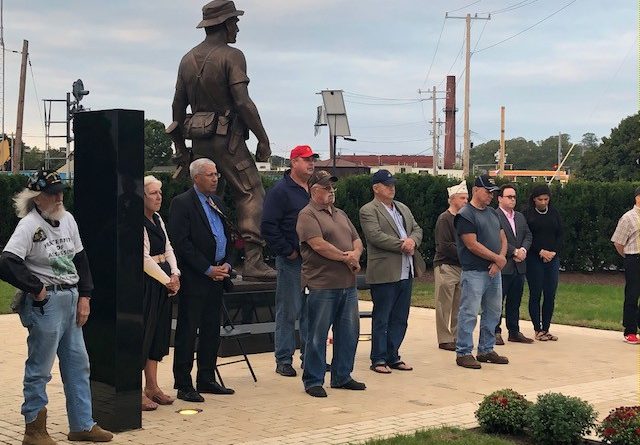 FRAMINGHAM – Veterans in Framingham participated in a ceremony to observe National POW/MIA Recognition Day on Friday night at the POW/MIA memorial statute at the MetroWest Regional Transit Authority property on Blandin Avenue.

On the third Friday in September, residents across America pause to remember the sacrifices and service of  individuals, who were prisoners of war, as well as those who are still missing in action in ceremonies.

All military installations fly the National League of Families’ POW/MIA flag, which symbolizes the nation’s remembrance of those who were imprisoned while serving in conflicts and those who remain missing, said one of the organizers Jim Pillsbury.

There are still 1,594 service members nationwide listed as missing in action (MIA).  Of those, 39 individuals are from Massachusetts.

During the Friday night event, the names of those 39 were read.

Vietnam Veteran Ed Carr, who is the director of the MWRTA, also spoke.