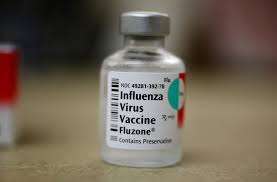 WASHINGTON DC – Senators Edward J. Markey (D-Mass.) and Amy Klobuchar (D-Minn.) today, September 18, commended passage of the Fiscal Year 2019 Labor-HHS-Education appropriations conference report that funds the universal flu vaccine at not less than $140 million. This builds on the required $100 million in the 2018 Fiscal Year omnibus, which the Senators secured for research related to a universal influenza vaccine.

Earlier this year, the Senators introduced the Flu Vaccine Act (S.2438), which would authorize additional resources over the next five years for research to help develop a more effective, universal influenza vaccine.

“Flu shots are already available for the coming flu season, and we need to make funding available for a universal flu vaccine to end of this viral scourge,” said Senator Markey. “Increased federal investment in a vaccine will help predict the right strain for the next season, produce a more optimal vaccine, and protect all Americans against all strains of this virus. I am pleased that we continue to invest in a flu-free future.”

“Last year’s flu was the worst we’ve seen in years and with the next flu season starting soon, we have to be prepared,” said Senator Klobuchar. “The Flu Vaccine Act will support critical research at the National Institutes of Health to finally develop a universal vaccine so Minnesotans and all Americans can be better protected from all variations of the flu.”

The most recent flu season was particularly damaging in the United States, resulting in at least 160 pediatric deaths.

Despite the damage inflicted by influenza annually, the current vaccine is only 60 percent effective at best.