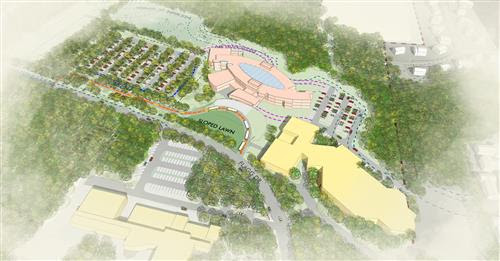 For the past year, the SBC and MSBA have been working on a feasibility study to address the conditions of the Fuller School, which was formerly the South High School. The study has concluded that the most cost-effective, sustainable and educationally appropriate solution is a new Fuller Middle School which features a learning commons/cafeteria surrounded by collaboration spaces fronting a perimeter of classrooms, an 8,300-square-foot gymnasium, 420-seat auditorium and full building air conditioning.

The MSBA is anticipated to provide a grant of approximately $39.5 Million.

The approximate total project cost is $98.3 Million with the City’s share after the grant from the MSBA estimated to be $58.8 Million.

“This vote is one important step in a long process and continues our forward movement,” said David Miles, Co-Chair of the School Building Committee. “The Massachusetts School Building Authority (MSBA) now has all the documentation needed to review and vote on the project at their Board Meeting on October 31st. Through our collaboration with the MSBA, Framingham Public Schools leadership, project manager, and project architects, the School Building Committee was able to balance affordability with prioritizing the educational needs of our students, educators, and the community.”

The MSBA will review the project submission in preparation for the MSBA’s approval at their October 31, 2018 meeting.

The City Council will vote to approve the project’s funding in the late fall, followed by the debt exclusion ballot vote anticipated to be held on December 11, 2018.

Framingham’s School Building Committee for the Fuller Middle School Building Project was formed in accordance with Massachusetts School Building Authority requirements to oversee the study and project on behalf of the community.  Membership of the group comes from City Government leadership, a City Council Member, Framingham Public School leadership, School Committee Members, teachers, engineers, and representatives from the community. The SBC has met approximately every two weeks since the fall of 2017.

Fuller Middle School has served the community well for over 60 years. The school has reached a point that it no longer meets today’s building codes, has structural deficiencies, inefficient and inoperable systems, and does not adequately support our educational curriculum. The MSBA has visited the school and agrees. The MSBA is the state agency charged with overseeing and supporting school improvement projects with state grants. The MSBA and the City of Framingham have undertaken the year-long study to develop a cost effective, sustainable, and educationally appropriate solution for the aging Fuller Middle School.