FRAMINGHAM – On Tuesday, September 4, voters will select a Democrat and a Republican write-in candidate to appear on the November ballot in the 6th Middlesex District state representative seat currently held by the late Chris Walsh.

Walsh died in May, after the deadline to file nomination papers for the state representative seat. He was running unopposed.

Now five individuals have declared themselves write-in candidates for the state representative seat for Precincts (not City Districts) 1, 2, 4, 5, 6, 7, 9, 10, 11, 12 and 15. There are no names on the ballot for those Precincts.

Voters in Precinct 3 will see Rep. Carmine Gentile on the Democratic ballot running unopposed. There are no names on the Republican ballot.

Voters in Precincts 8, 13, 14, 16, 17, and 18 will see Rep. Jack Patrick Lewis on the Democatic ballot running unopposed. There are no names on the Republican ballot.

Framingham Source requested the voting records of the five write-in candidates from the Framingham City Clerk’s office for the last five years.

Editor’s Note: In full transparency, Source has accepted political advertising from three of the five candidates. Source is not and has ever endorsed a political candidate. And, personally, I live in Precinct 15 and will vote in the election on Tuesday. Precinct 15 is part of the 6th Middlesex District. 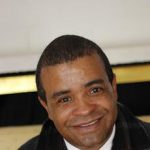 Republican write-in candidate Tom Blandford voted in only two local elections between 2013 and 2017 – September 2017 and November 2017.

“Ever since the age of 18 I have always tried to vote and vote my conscience. I  do not vote strictly the party line. I have been on my own since the tender age of 15 and had to be an independent thinker in order to survive. My father always taught me to believe in a balance democracy,” said Blandford to Source.

“Since living in Framingham I have found myself voting for democrats, republicans and others depending upon the issues that they stood for. If I have ever missed a great opportunity to vote, it’s  because as a minority and a republican, I felt like there has been times where my voice would not matter and sometimes even today as an African-American Republican, I still feel that coming from the other side that the deck is stacked against me. With that being said I give my word and I promise that I will include everyone from all sides in the conversation,” said Blandford to the news outlet. 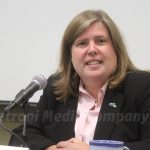 There were two state primaries and two state elections in 2013, Feeney voted in three out of four of those elections.

Feeney, who lives on Ledgewood Road in Framingham, was registered as an unenrolled voter, an individual with no party affiliation, at the time of the historic first mayoral election in November 7,  2017, according to the City Clerk’s office.

On December 28, 2017, she changed her status from an unenrolled voter to a member of the Democratic party.

Source gave each of the five candidates a chance to clarify their voting record.

“Before I was 18 years old, I enthusiastically registered to vote at the Memorial Building,” said Feeney. “Voting is important to me, yet I was unable to vote in the 2013 local election due to recovering from a serious accident.”

Feeney said “I am a consistent Democratic voter, but I voted in the Republican primary in 2016 to take a stand against Donald Trump. With the climate in Washington, D.C. and the election of Donald Trump, I decided to officially become a Democrat.” 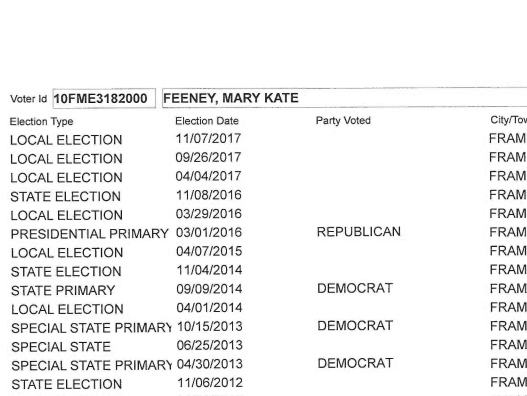 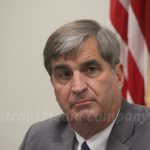 Write-in Candidate Mike Gatlin has voted in all 7 local elections between 2013 and 2017. He has also participated in all the state and federal elections in the last five years.

“I’ve always considered voting to be an honor and a privilege as well as a responsibility. You don’t fully participate in your community unless you vote,” emailed Gatlin today. (updated) 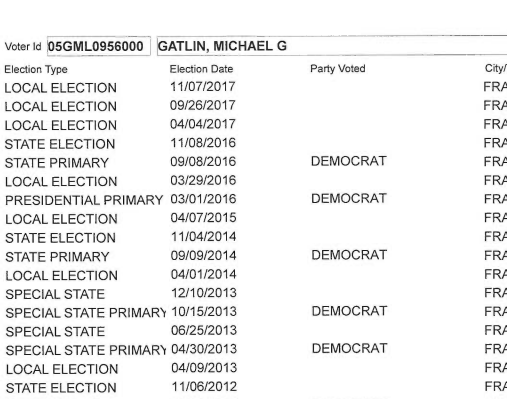 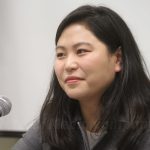 Write-in candidate Maria Robinson voted in five of the seven local elections, between 2013 and 2017.

A registered Democrat, she voted in all the state/federal elections during that five year period.

In the historic Mayoral election on November 7, 2017, Robinson voted in Precinct 8, which is part of the Seventh Middlesex District. The City Clerk’s office has her address for that election at 71 Indian Head Road.

“Maria was a extremely dedicated volunteer and a huge help with my field ops. I often referred to Maria as my field ops director. I will forever be grateful to Maria for her support. She was always one of my top volunteers until a personal family matter did not allow her to help much at all before the primary election. My official campaign manager was Sandra Desjardins. I do attribute my close City Council race to a significant amount of help and dedication that Maria provided early on in the campaign however,” said Case in a statement today.

Robinson changed her address with the Framingham City Clerk’s office on January 22, 2018 to 560 Edgell Road, according to City Clerk Lisa Ferguson.

Robinson will cast her first official vote in the Sixth Middlesex District on Tuesday, September 4.

“I cleared this situation with the Secretary of State’s office before pulling papers with OCPF and specifically asked about whether I qualified as a candidate due to the residency requirements. According to the Secretary’s office, the legislation specifically speaks to residency; we moved in September of 2017, but I did not get to change my registration in time for the November election due to a family illness,” said Robinson in an email to Source.

“Because I lived in the district since September of last year, I meet the residency requirements according to the Secretary’s office. I also got clearance from city clerk Valerie Mulvey prior to her retirement,” wrote Robinson.

The Secretary of State’s office told Source that because all of the candidates for the 6th Middlesex District state representative seat are write-in candidates, none of their residency was verified nor challenged.

A spokesperson for the office said any candidate’s name who appears on the ballot must proof residency, and there is a time period in which the residency can be challenged.

For example, the write-in candidate who wins the primary on September 4, will have his or her name placed on the November 6, 2018 ballot. Any challenge to that candidate’s residency must be filed by 5 p.m. on September 10.

Source contacted Mulvey about her discussion with Robinson on her residency.

“In May, I informed Maria Robinson that to serve as the 6th Middlesex State Representative she had to have resided in the district for one year prior to the election.  Ms. Robinson told me that she had contacted the Secretary of State’s Office and was told that as long as she could verify that she fulfilled the residency requirement she could serve as State Representative in the 6th Middlesex District,” said Mulvey.

“As the City Clerk I did not grant “clearance” for Ms. Robinson’s residency, simply concurred with the Secretary of State’s opinion,” said Mulvey, who retired this summer as the City’s first-ever clerk.

Editor’s Note: After her retirement, Mulvey endorsed a candidate for the 6th Middlesex seat.

The Secretary of State’s office said residency for voting is not always as black and white, as where you last voted.

At its most basic level, residency is about where someone lives. Of course, where someone lives can be up for debate. People move around; some people own more than one home, some people split their time between states because of work or school. It’s one of those issues where the law runs up against the messy reality of human life. Since defining where a person lives can be complicated, a key element of residency is voter intent, wrote the National Conference of State Legislatures (NCSL) in a May 2016 newsletter.

“Almost every state has laws that define what it means to be a resident for voting purposes. Residency definitions generally have two basic components: where you live, and how long you have lived there,” according to the NCSL.

The last major challenge about residency for a politician in Massachusetts came in 2002, said the Secretary of State’s spokesperson.

Mitt Romney was challenged about his Massachusetts vs Utah residency when he was running for Governor.

He won his case, and was elected Governor. 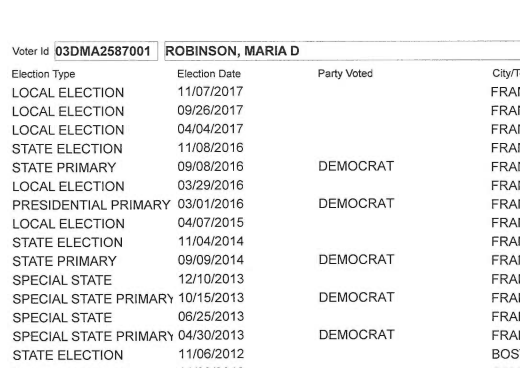 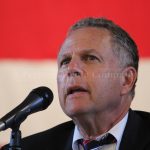 Write-in candidate Mark Tilden, ran for Mayor last year and did not advance to the final election in November. Source pulled his voting record last summer.

Between 2013 and 2017, Tilden voted in five out of the seven local elections.

Source offered him an offered an opportunity to submit a statement on his record, he did not submit one.