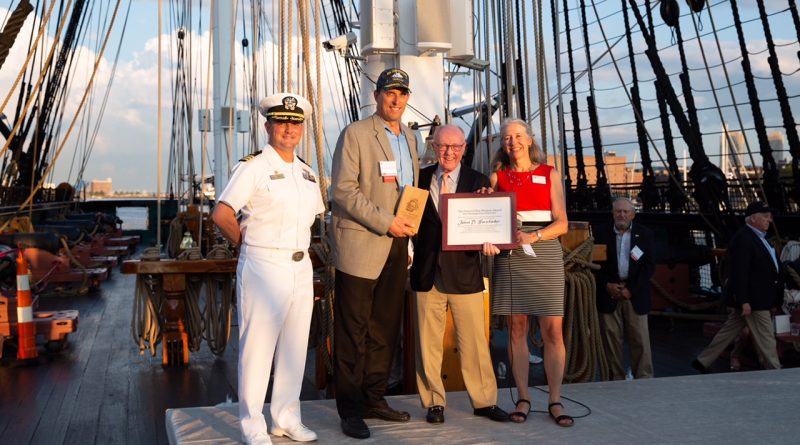 “At the museum we bring maritime heritage to life by sharing the personal stories of those who served at sea,” said USS Constitution Museum President Anne Grimes Rand. “James Hornfischer and the National World War II Museum’s PT-305 Restoration Team do just that; through their craft you hear from the voices of those who served throughout history.”

The award is presented to a person whose public service has enhanced the image of USS Constitution and who reflects the best of Admiral Morison:  artful scholarship, patriotic pride, an eclectic interest in the sea and things maritime, and a desire to preserve the best of the past for future generations.

Hornfischer, a graduate of Colgate University and University of Texas Law School, grew up Massachusetts.

He attended the event with his parents, David and Elsa Hornfischer of Framingham.

“Recognition in the name of the great literary admiral is the highest acknowledgement there is for a narrative historian,” said Hornfischer on receiving the award. “While I am no Morison—he was, after all, likened to Thucydides—this honor suggests that my books are connecting with readers in a way that might give them a chance to stay in print for a while.”

World War II naval history was significant in Hornfischer’s youth. He recalled, “Canoeing at night on lakes when I was fifteen, I would make out the silhouettes of hills, and the names of Pacific War naval campaigns would leap to mind: Guadalcanal, Tassafaronga, Surigao Strait. The exoticism, terror, and majesty of it captured my imagination.”

“Writing history has been a chance to convey that from the close viewpoint of the people whose courage, intellect, and grit produced an epochal victory. Without control of the seas, the U.S. does not beat enemies on the other side of an ocean.”

Hornfischer has published four books on the history of World War II in the Pacific including his most recent work, The Fleet at Flood Tide: America at Total War in the Pacific, 1944-1945. Each of Hornfischer’s works have been recognized for their scholarship and contribution to the understanding of naval history with reviewers rating him as one of the most commanding naval historians today. All four have been named on the New York Times bestseller list and three were selected for the History Book Club and Military Book Club.

When asked about his next book Hornfischer commented, “The subject is the naval Cold War. Rocky IV in missile cruisers. That said, I better leave the marketing to my publisher.”

Over the past decade a restoration team made up of more than 100 volunteers worked to fully restore PT-305, a World War II motor torpedo boat using primary sources and original parts as often as possible. PT boats served with great distinction throughout the Second World War in both the European/Mediterranean and Pacific theaters of operation. They gained early distinction in the Philippines when LT John Bulkeley and his squadron helped General MacArthur escape from Corregidor and they would later become well known as the type of vessel President John F. Kennedy served on during the war.

“The team was driven [to restore PT-305] by a desire to remember the men and women who served in WWII, especially the PT boat sailors,” said Tom Czekanski, senior curator and restorations manager at the National World War II Museum. “In addition, PT-305 is a Higgins product, produced in New Orleans and there was a desire to remember that contribution to the war effort as well.”

Sixteen volunteers from the restoration team accepted the Don Turner Award on behalf of the entire PT-305 Restoration Team and the National World War II Museum. The award is named in honor of the former head of the USS Constitution Maintenance and Repair Facility, now known as the Naval History & Heritage Command Detachment Boston located in Building 24 of the Charlestown Navy Yard.

The award is presented annually by the USS Constitution Museum to a person or team of people who have contributed to efforts to preserve important vessels or who have made significant contributions to our knowledge and understanding of ship design and construction.

“Both the restoration team and the National World War II Museum are proud to be honored by the USS Constitution Museum,” said Czekanski. “It means a great deal to be recognized by such a prestigious organization.”

Completed in 2016, PT-305 is the only fully operational PT boat accessible to the public today. The restoration has been very well received. People from around the United States helped with the completion of the restoration of PT-305; a Kickstarter campaign raised $205,506 and new and old parts were donated to the Restoration Team’s efforts. Czekanski commented that PT-305 was rebuilt by the whole country just as she was during WWII.

Following presentations from both awardees the nearly 90 guests were welcomed onboard USS Constitution by Commander Nathaniel Shick for the awards ceremony and reception.

At 7:53 p.m. the event concluded with the observation of evening colors—the ceremonial lowering of the American flag at a naval command ashore or aboard a U.S. Navy ship not under way.

The USS Constitution Museum serves as the memory and educational voice of USS Constitution by collecting, preserving, and interpreting the stories of “Old Ironsides” and those associated with her. This award-winning, educational non-profit welcomes 400,000 visitors each year and provides a hands-on, minds-on environment where inter-generational groups seeking an enjoyable, educational experience can have fun while learning and exploring history together. The USS Constitution Museum’s mission is to engage all ages in the story of “Old Ironsides” to spark excitement about maritime heritage, naval service, and the American experience.