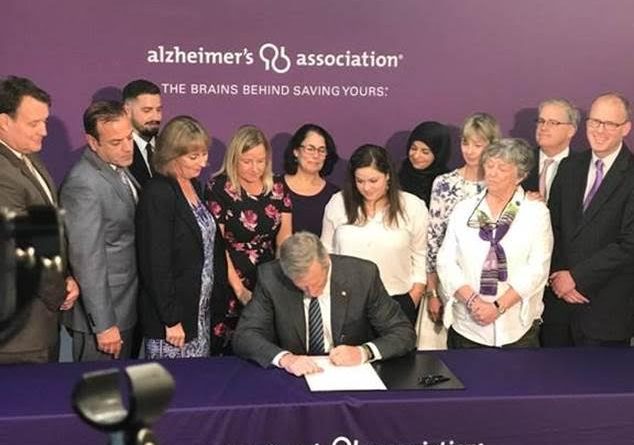 WALTHAM – Massachuetts Governor Baker today, August 15, was joined by members of the Administration, Legislature and healthy aging community today at the ceremonial signing of H.4116 An Act relative to Alzheimer’s and related dementias in the Commonwealth during an event at the Alzheimer’s Association in Waltham.

“Raising awareness about Alzheimer’s and dementia is key to supporting the Massachusetts families who are impacted by this horrible disease,” said Governor Baker. “This legislation will enhance efforts to train front line caregivers on recognizing and treating dementia more effectively, and work with families of loved ones to prepare and manage the effects of Alzheimer’s.”

“This important legislation acknowledges that Alzheimer’s and other dementia affects not just individuals but communities and families,” said Senate President Karen E. Spilka.  “As someone who has been affected personally by Alzheimer’s and dementia in my family, I am grateful for this comprehensive approach.”

“There are cities and towns all across Massachusetts that are joining the Age and Dementia Friendly movement and I am proud of the work we have accomplished so far,” said Lieutenant Governor Polito. “Over 100 communities across the Commonwealth are currently pursuing improvements in their physical and social environments and policies to ensure they are great places for residents to grow up and grow old together.”

“More than 130,000 Massachusetts residents live with dementia. Despite its widespread impact, lack of information, fear, and stigma can prevent those affected from feeling safe, socially connected, and able to thrive in their communities. Often, family members carry the financial and emotional burden from caring for their loved ones,” said Massachusetts Health and Human Services Secretary Marylou Sudders. “This legislation brings the diseases of Alzheimer’s and dementia to the forefront and will promote early detection and diagnosis, reduce risk, prevent avoidable hospitalizations, support caregivers and mitigate health disparities.”

“The training and education requirements of this legislation will help to ensure individuals suffering from Alzheimer’s or a related dementia and their families get the services they need and the treatment they deserve,” said House Speaker Robert A. DeLeo. “I’m proud of the work that Elder Affairs Committee Chair Rep. Danielle Gregoire and members of the House did to move this important issue forward and protect and serve these vulnerable patients as they seek medical help.”

“Today marks the final step in Massachusetts’ journey towards reversing the course of the public health crisis that is Alzheimer’s disease,” said Representative Danielle Gregoire (D-Marlborough), Chair of the Committee on Elder Affairs.  “I am so proud that Massachusetts will lead the country yet again with this comprehensive legislation that addresses not only those suffering from this disease but also their caregivers and healthcare providers.  As we worked on this legislation, it became painfully clear to us that nearly every resident of the Commonwealth has been irreparably damaged by Alzheimer’s or one of the many other forms of dementia.  As the number of residents diagnosed with Alzheimer’s continues to grow, this legislation that we have before us will make great strides in the treatment, detection, training and development of supports for those grappling with this devastating disease.”

“Alzheimer’s is the single largest unaddressed public health threat in the 21st century and we remain on the front lines of this crisis every day here in the Commonwealth,” said Daniel Zotos, Director of Public Policy & Advocacy of the Alzheimer’s Association, Massachusetts/New Hampshire Chapter. “This legislation follows in the tradition of Massachusetts being a national leader in health care and we commend the Governor and Legislature for ensuring everyone impacted by Alzheimer’s gets the quality care and support they deserve. The Alzheimer’s Association would like to recognize Governor Baker for his continued leadership on this issue as well as Senator Barbara L’Italien, Senator Jason Lewis, and Representative Danielle Gregoire for their tireless efforts. Because of this legislation, families impacted by Alzheimer’s and dementia and our health care system will be much better prepared in fighting this epidemic. We also recognize several legislators that filed original pieces of legislation that created the foundation for this comprehensive bill: Senators Patricia Jehlen, Michael Moore and Mike Rush and Representatives Paul Brodeur, Paul McMurtry and John Scibak. This is a very significant achievement, and will stand out as one of the most comprehensive dementia policies in the country. Bold policy endeavors such as this really do take a village and we can be proud of the strong coalition of policymakers, organizations and advocates who have been so committed to this issue.”

Summary of the Alzheimer’s and Related Dementias Law

In Massachusetts, there are more people over the age of 60 than under the age of 20 and older adults will make up 23 percent of the Commonwealth’s population by 2035.