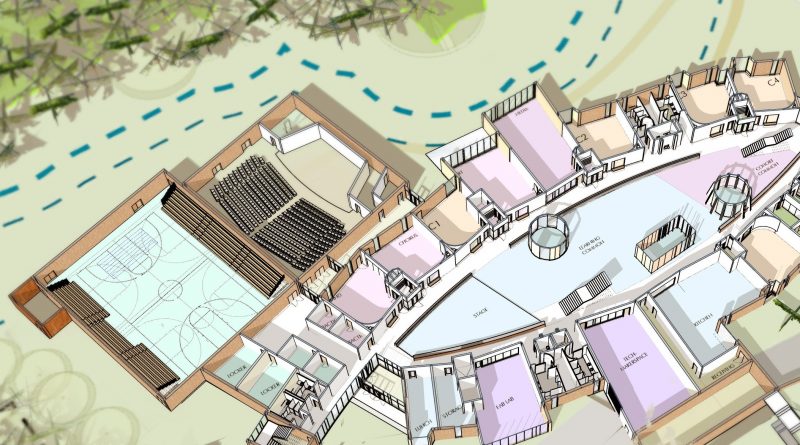 FRAMINGHAM – As many people know, Framingham is fortunate to have incredibly strong performing arts programs and offers a wealth of opportunities for students to participate.  From vocal groups to instrumental groups to our 2016 State Champion FHS Drama Company, these ensembles help students develop self-confidence, poise, public speaking skills and teach them the value of teamwork.

Beginning for many students in middle school and continuing through high school, these groups form smaller “communities” within their respective schools and allow students to form strong and positive relationships which contribute to their overall social and emotional well-being.

It is for these reasons that the auditorium in the new Fuller Middle School has been the subject of extensive analysis, discussion and refinement.  For those who have not followed closely, here’s a brief history.

Act 1 of this story took place during the fall of 2017 and early winter of 2018, as the project architects presented several “concept options” for the new Fuller Middle School to the School Building Committee (SBC).  Noticeably absent from these designs was a true auditorium similar to what exists in the current Fuller, Walsh and Cameron schools. In its place, the concepts had a cafeteria with a stage tacked on to one end so that the space could be converted from a dining hall to a performance venue.  This “cafetorium” design is similar to what you’d find in most elementary schools.

Much to my delight my sentiments were echoed by a number of members of the School Building Committee, many of whom were aware of how well-regarded our Performing Arts programs are across the state.

Act II took place in late winter and spring as the project architects presented refined concept designs to the School Building Committee.  In response to the SBC feedback about the auditorium, the concept designs now included proper auditoriums.

Furthermore in an effort to respond to a desire expressed by the current Fuller principal to be able to have the entire school community (students and staff) come together for an assembly, the auditorium was specified to have 750 seats.

These auditorium specifications persisted as the SBC reviewed the various concept options and ultimately voted to move forward with the “Folded Hands” design.

Act III began in early summer of this year and continues to this day, as the SBC continues to refine various aspects of the design for the new Fuller Middle School.  As part of this refinement the design team met with Donna Wresinski, Fine and Performing Arts Director for the Framingham Public Schools and also Chair of the Massachusetts Educational Theater Guild.  With input from Donna, the design team made several changes to the design of the auditorium and supporting spaces so that this version is “just right”:

As you can see, considerable time and thought has gone into the design of the auditorium in the new Fuller Middle School plan, and all of it has been done in a very public and transparent way.  To clarify an assertion that has been made by some in our community, we are not “building a state-of-the-art theater.”

What we are doing is making sure that the new Fuller Middle School auditorium is functionally equivalent to those in the existing Fuller, Walsh and Cameron buildings, and making sure that future generations of Fuller performers have the same opportunities to make us proud as a community.

For more information or to submit questions to the team, go to  www.fullerbuildingproject.com where you can find FAQ documents, previous presentations and meeting materials, and a link for submitting feedback or questions.

Lastly, freel free to check out my previous articles on the MSBA Model School Program and the Cafeteria / Learning Commons in the new Fuller Middle School.