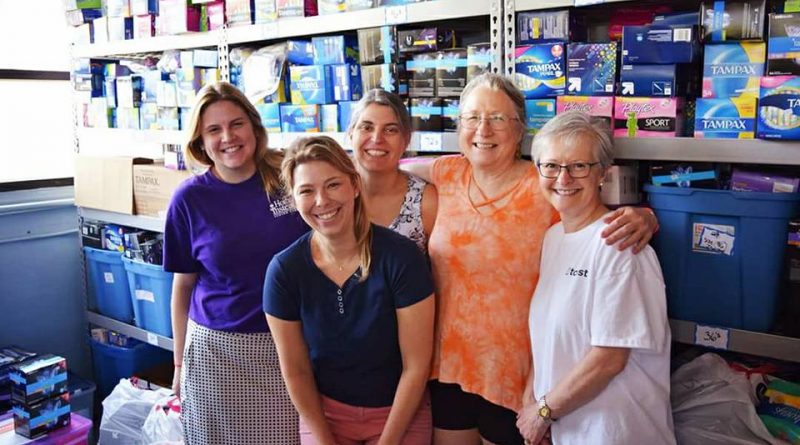 FRAMINGHAM – Dignity Matters, a Massachusetts based non-profit that provides feminine care products, underwear and bras to homeless women and school-aged girls recently
moved their headquarters from Wayland to Framingham.

The warehouse is now located at 7 Bishop Street, Building 29.

A staggering number of women living in homeless shelters in almost every community within Massachusetts do not have access to many of the items other women take for granted – namely, tampons, pads, new underwear, and new or gently used bras.

Shelters and public schools cannot meet the demand and food stamps do not cover them.

Every month, thousands of homeless women are placed in a crisis situation from dealing with infections to being unable to purchase sanitary supplies.

Keeping safe and clean isn’t easy on the streets.

Kate Sanetra-Butler, a former corporate executive and mother of two was confronted with this reality when a homeless woman in Boston asked her for a spare tampon. In that moment, Dignity Matters was born.

This non-profit organization is taking action by collecting and distributing these much-needed items to many homeless women and girls in Massachusetts. An all-volunteer organization, Dignity Matters is currently supporting 15 shelters, over 100 scattered sites for families, multiple domestic violence programs, food pantries, 11 after school
programs and 30 schools in the greater Boston area.

The rapid growth of Dignity Matters in just 18 months made it necessary to warehouse the many donations coming in.

Year to date 2018, the organization has tripled its in-kind donations from 120,000 to over 360,000 donated products. In addition, through the many new partnerships
Dignity Matters has secured this year, distribution to those in need will also grow 3 times.

For more information on the many ways to be involved with Dignity Matters, email info@dignity-matters.org.