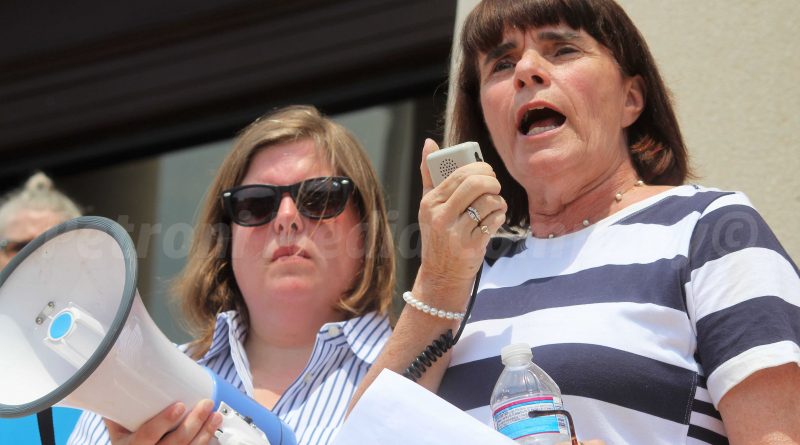 FRAMINGHAM – “All children need to stay together with their families,” declared District 9 City Councilor Edgardo Torres on Saturday afternoon at the Families Belong Together protest at the Memorial Building in downtown Framingham.

Torres was one of a handful of local leaders who spoke at the protest that drew a crowd of 200-300 individuals.

“We need to take a stand on what is going on in this country,” said Feeney.

The protest was against the nation’s federal immigration policy which has been separating families as they cross the border into the United States. Estimates have more than 2,000 parents separated from their children.

Congresswoman Katherine Clark visited the border of Texas and Mexico recently, and while she could not attend the rally her aide Wade Blackman spoke.

“Unfortunately, her visit to the boarder confirmed her worst fears,” said Blackman. “The Congresswoman visited with children living on concrete floors, huddled under Mylar blankets.” She met with mothers who have no idea where their children are.

“Our office has heard from an overwhelmingly number of constituents like you,  from all over the district, expressing their dismay, disbelief, and disgust on this policy,” said Blackman. “I stand with you today, to say I share your outrage. This policy is immoral, dangerous, and simply wrong!”

“Framingham, this is our time, to stand united, and firm against the separation of families at our borders,” said District 8 School Committee member Gloria Pascual.

“I want all the leaders in Framingham, in this state, and across the world, to stand up against these cruel and unjust policies,” said Pascual.

“As an American, and as your Mayor, and first and foremost as a human being, what is happening in this country, must stop,” said Framingham Mayor Yvonne Spicer to the crowd.

“This is not the America our forefathers envisioned,” said City Councilor Cheryl Tully Stoll. “The Statue of Liberty says something, and it is supposed to mean something.”

“We need the federal government to take responsibility for these shameful actions,” said Tully Stoll. “And reunited these families as soon as possible. And then we need to make sure, going forward, that nothing, even remotely close to this ever happens in this country again.”

“We are going to a place in this country, that is not comfortable for me,” said the Mayor. “It doesn’t feel like this is the country that I want to live in.”