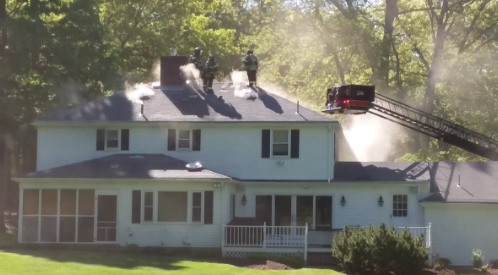 FRAMINGHAM – While at their second fire today, May 21, Framingham firefighters received a call for a house fire – their third fire in less than 3 hours.

Firefighters were called to 3 Lavelle Lane for a an interior house fire, while at the scene of an attic fire on Irving Street, across the street from Framingham Fire headquarters, said Framingham Fire Chief Joseph Hicks.

The homeowner was alerted to a fire in her basement, through her home security system, said Chief Hicks.
When firefighters arrived, they discovered an involved fire in the basement, said Hicks. Firefighters had to vent the roof to fight the fire.
There was heat, smoke, and water damage.
The home is not habitable, said Hicks.
The home is assessed at more than $550,000, according to Framingham Assessor’s records.
The 10-room home was built in 1972, according to the Framingham Assessor’s office.
The home is listed to Lisa and Kenneth Wilensky, according to the City of Framingham.
No one was injured, at this time, said Hicks, who said firefighters were still at the address, when he talked to SOURCE.
Framingham Fire is still investigating the fire.
Source will update when we have more details.
***
Photo courtesy of Framingham Fire
Last updated at 10:07 a.m.