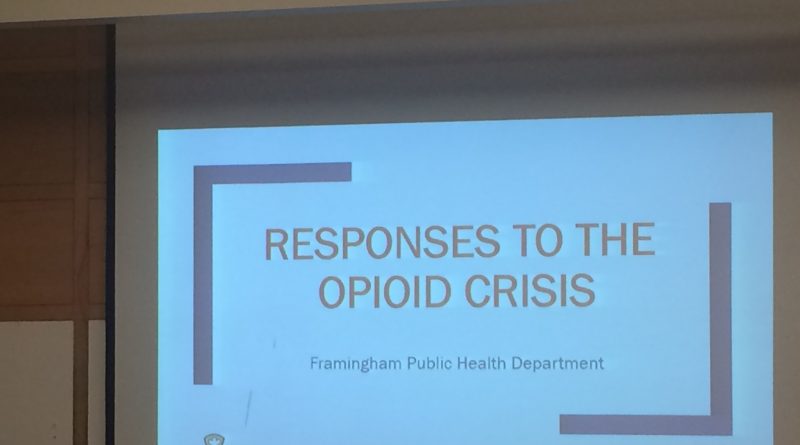 FRAMINGHAM – Wednesday night, Framingham’s Mayor hosted a community conversation on the opioid issue in the city.

Spicer said she found the issue extremely important, as she has a relative who has struggled with addiction for 20 years.

According to statistics presented by Chief Ferguson, in Middlesex County, there were 251 overdose deaths in 2016, 168 of which were from Heroin. In 2016, there were 222 deaths; 153 from Heroin. These included overdoses both intentional and unintentional.

According to Wong, the overall strategies for dealing with the opioid crisis include: public health approach, regional, interventions for current users (saving lives, reducing harm and connecting to treatment) and prevention (mental health, substance use prevention and protective factors). Framingham’s approach consists of a collaboration between law enforcement and public health officials.

In terms of saving lives, there is a Naloxone Distribution Program. This is not only program in Framingham, but a regional program that is also found in Ashland, Hudson and Natick. Wong says that this program is the first of its kind in Massachusetts. The program is available for any resident by appointment and is also available for businesses and organizations.

In terms of harm reduction, there are evidence-based programs, policies and practices that reduce the negative consequences of drug use. According to Wong, the hope of these programs is to “meet people where they’re at, but not leave them there.” Examples of harm reduction include Naloxene (Narcan), Needle Exchange Program, Medication-Assisted Treatment and Overdose Follow-Up.

Prevention efforts are another approach that Framingham is taking toward the opioid crisis. These efforts include Youth Substance Use Prevention (alcohol, marijuana and nicotine), Youth Mental Health (stress, anxiety, and other mental health issues) and Positive Youth Development (protective factors, strength-based approach on Developmental Assetts and competencies to take a more active role in development).

In addition, Framingham is part of the Regional Opioid Coalition. The Massachusetts Opioid abuse Prevention Coalition, MOAPC, is funded by the Mass. Department of Public Health. The MetroWest MOAPC consists of Framingham, Ashland, Natick and Hudson. They are  convening stakeholders and practice harm reduction and prevention efforts.

Since 2016, Framingham has had the CARES Initiative. The initiative is a component of the Jail Diversion Program. The main goal of the program is to “reduce the number and frequency of opioid overdose deaths in the Framingham community.” How does this program work?

So far, through the CARES Initiative from May 1, 2016-April 1, 2018, there have been 156 opioid related overdose responses. However, it is important to note that not all are unique individuals, many people had repeat overdoses.

“That’s 19 too many in the City of Framingham,” said Mayor Spicer.

One major issue pointed out during the discussion is the stigma surrounding addiction. Many people believe that addiction is a choice. However, as Sam Wong pointed out, addiction is a disease; it is a neurological disorder.

Chief Ferguson acknowledged this and said that law enforcement is treatment-focused.

“We know we can’t arrest our way out of this,” he said.

He also pointed out that the Framingham Police Department tries to help as much as they can on the prevention side, especially through its pro-active resource officers.