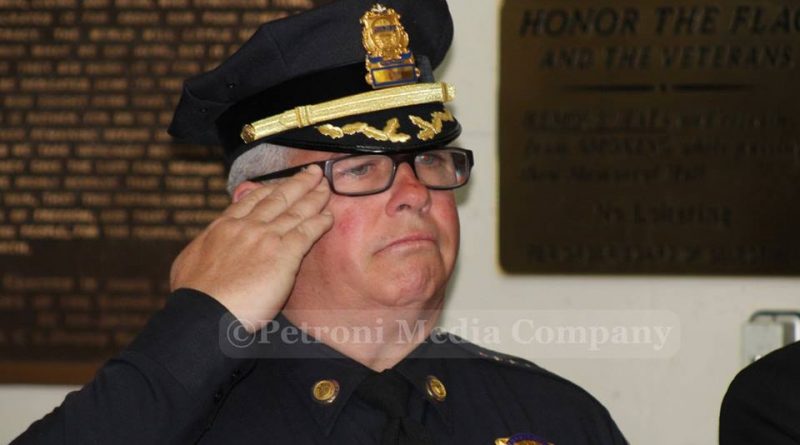 FRAMINGHAM –  Police Chief Ken Ferguson will retire this month, after more than three decades of service with the City of Framingham.

Chief Ferguson, 55, has been with the department for 34 years. His last day will be Friday, April 27.

Hired in 1985 in Framingham, Ferguson spent four years as a military police officer with the U.S. Air Force.

Ferguson was appointed Chief by the Framingham Board of Selectmen in 2013. He was re-appointed in 2016. His current contract ended in 2019.

The Chief said he sent an email to the department tonight, April 18 informing them of his decision.

“It was an honor to have worked along side Chief Ferguson as art of his administration the last 4.5 years,” said Framingham Deputy Police Chief Ron Brandolini. “Although, I hate to see him leave, I understand after 34 years of service to Framingham he is ready to move on.”

“As a member of the department, I would sincerely like to thank him for his commitment, dedication, and compassion he has shown throughout his distinguished career. We wish him happy and healthy days in his retirement,” said Deputy Chief Brandolini.

Chief Ferguson, worked for three police chiefs before becoming one himself, but he had been around the Framingham Police Station long before he was hired. Ferguson worked with his father Officer Joseph Ferguson for almost a decade, when he joined the Framingham force.

Chief Ferguson said one of his department’s greatest successes was how the department dealt with people struggling.

“Crime has consistently declined in Framingham,” said the Chief. “Except for a slight up tick in 2012, there has been a considerable reduction in crime.

“What is nice about Framingham, is that issues looked at as public safety issues are now looked as as community issues,” said Chief Ferguson, who was preparing tonight for a community discussion on the opioid crisis next Wednesday, April 25.

The Chief said his focus has always been on building relationships.

“The role of policing has changed since I started but the key thing for me has always been the same, the community needs to trust its police officers. People have to trust the police. Every day, there are great officers in Framingham doing great work in the field, to build that trust with the community. The department wouldn’t be as successful, it it was not for those officers,” said Ferguson.

“I wish him well. He has done a great job for the Town and the City,” said District 1 City Councilor Charlie Sisitsky.

Sisitsky was on the Board of Selectmen who made Ferguson Chief.

“He has served his community well. He worked his way up the ranks. He has been very progressive in bringing programs to the community,” said Sisitsky.

Framingham City Councilor George King, who appointed Ferguson Deputy Police Chief when he was Framingham Town Manager, said he “always enjoyed working with him.” He wished him well in his retirement.

Ferguson took some time away from the police department in 2016, for medical reasons. On why he is retiring now, he said he felt the time was right.

“I wanted to be supportive during the transition from a town to a city,” said Ferguson. “Policing has changed over the decades. … I was fortunate to have led the police department during a time when officers were doing great work helping people suffering from mental illness, battling opioid addiction, and providing needed services to victims of domestic violence. … But, now is the time to retire.”