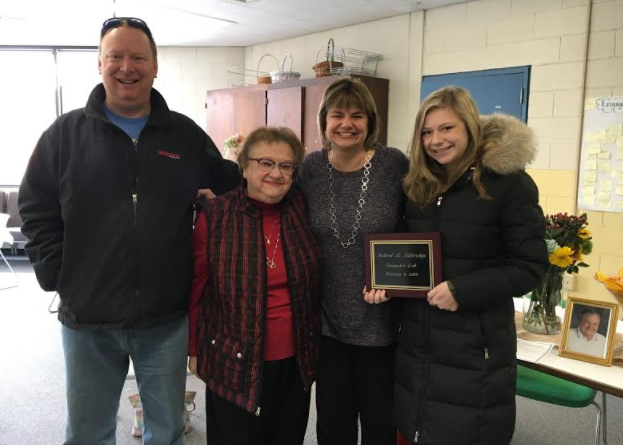 FRAMINGHAM – The Barbieri Elementary School computer lab was dedicated in honor of the late Roland K. Kittredge,  a former technology specialist at the school on March 9.

Kittredge passed away in June after a period of declining health, and his passing had a very large impact on the Barbieri community.

Barbieri Elementary Principal Susan McGilvray-Rivet spoke of his immense care, concern, and work ethic no matter the “technology task,” and his frequent impactful and funny emails that he would often send to the staff, whether it was a jib-jab card at the holiday or an inspirational quote about teaching and learning.

Joining at the dedication were Roland’s wife, Sandy, his daughter, Kim Taylor, his son-in-law, Matt Taylor, and his granddaughter Courtney Taylor.
While giving her closing remarks, Kim thanked the staff for their unending support of their family throughout the challenging 5 months last year while her dad was sick.
She also announced a scholarship in Kittredge’s honor that will be awarded to a deserving Barbieri fifth grade student, who shows an interest and level of expertise in technology, exhibits the qualities of the Barbieri CARE program and shows a financial need. The scholarship will be awarded in the spring.
***
Photo courtesy