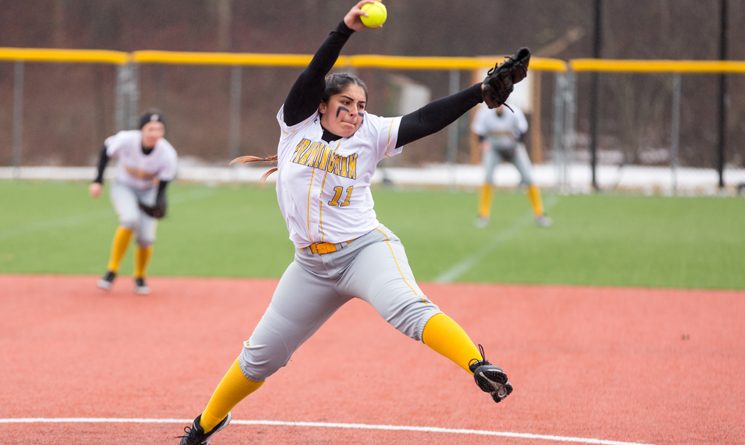 CLERMONT, FLORIDA – The Framingham State University softball team dropped a pair of games this afternoon at the PFX Games

The Rams were defeated 3-1 in the opener by Wisconsin-River Falls and fell to Bowdoin College 12-7 in the nightcap.

With the losses, the Rams are now 2-6 on the season and close their spring break trip Friday, when they face Fredonia at 2 p.m. and the University of New England at 4:30 p.m.

In the opener, Wisconsin-River Falls took a 1-0 lead in the bottom of the first on a fly out off the bat of Maddie Studnicka.

The Rams tied the game in the top of the third.  Sophomore Kirsten Dick singled to center and was sacrificed over to second by junior Lauren Salisbury.

Senior Dayna Marchant reached on an infield single moving Dick to third.  Senior Megan Downing followed with an RBI single to center tying the game at 1-1.

Wisconsin-River Falls tallied single runs in the bottom of the fourth on an RBI fielder’s choice with the bases loaded and fifth on Studnicka homerun to reach the final score.

After game one of the day, Marchant now has 162 career hits surpassing the old mark of 160.

Junior Kelsi Gunarathne took the loss in the circle for the Rams going six innings and allowing three earned runs on six hits with four walks and three strikeouts.

In game two, which saw a combined 19 runs scored and 23 hits, the Polar Bears got on the board first in the top of the first inning with four runs.

The Rams got on the board in the third with a pair of runs.  Freshman Grace Caughey reached on an infield single and moved to second on a wild pitch.  Marchant followed with a single moving Caughey to third.  Sophomore Mycala Moody grounded out scoring Caughey.  After an out, senior Anna Dziok belted an RBI single that scored Marchant.

The Rams took the lead, 5-4, in the bottom of the fourth.  Freshman Camille Desrochers doubled and moved to third on a wild pitch.  Sophomore Kyla Johnson singled home Desrochers.  Moody followed a couple of batters later with a two run single.