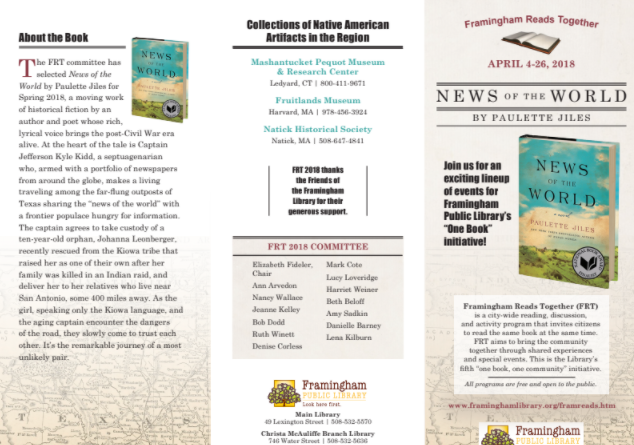 FRAMINGHAM – The Framingham Reads Together committee has selected News of the World by Paulette Jiles for its 2018 selection.

Framingham Reads Together is a city-wide reading, discussion, and activity program that invites citizens to read the same book at the same time.

This is the Library’s fifth “one book, one community” initiative.

Framingham Reads Together aims to bring the community together through shared experiences and special events.

News of the World is a “moving work of historical fiction by an author and poet whose rich, lyrical voice brings the post-Civil War era alive,” according to the Committee.

Book synopsis: At the heart of the tale is Captain Jefferson Kyle Kidd, a septuagenarian who, armed with a portfolio of newspapers from around the globe, makes a living traveling among the far-flung outposts of Texas sharing the “news of the world” with a frontier populace hungry for information. The captain agrees to take custody of a 10-year-old orphan, Johanna Leonberger, recently rescued from the Kiowa tribe that raised her as one of their own after her family was killed in an Indian raid, and deliver her to her relatives who live near San Antonio, some 400 miles away. As the girl, speaking only the Kiowa language, and the aging captain encounter the dangers of the road, they slowly come to trust each other. It’s the remarkable journey of a most unlikely pair.

The community is invited to read the novel and then join a community discussion, and attend related events.

Copies are available at both the main Framingham Library on Lexington Street and the Christa McAuliffe Library branch on Water Street.

In April 2018, there are 10 scheduled events associated with the novel and Framingham Reads Together 2018.

Friday, April 13
Film: The Post
Professor Bill Wray will introduce and lead a discussion of this new and provocative film about the release of the Pentagon papers.
Main Library, Costin Room,  7 p.m.

Wednesday, April 18
Native Americans of the Northeast Catherine Shortliffe of the Fruitlands Museum presents an interactive family program about life for Native peoples of New England before and after European contact. Learn how communities worked together to secure food and resources for survival. Discover the artistry and technology used to create personal belongings and tools. Try your hand at basket making!
Main Library, Costin Room,  2 p.m.All ages.

Friday, April 20
Film: Up Heartbreak Hill
First aired on PBS’ POV, this documentary chronicles the lives of three high school seniors living on the Navajo Nation and struggling to shape their identities as both Native American and modern American. They must decide whether to stay in their community—a place inextricably woven into the fiber of their beings—
or leave in pursuit of educational and economic opportunities. Paula Marsh will introduce the film and lead a discussion after.
Christa McAuliffe Branch Library,
Community Room,  7 p.m. For Ages 12 and up.

Black and White and Read All Over: Circulating News in Post-Civil War America
Professor Joe Adelman explores how Americans got their news in the years after the Civil War.
Main Library, Costin Room,  7 p.m.