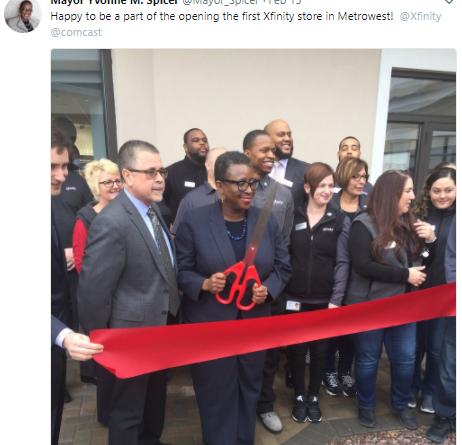 FRAMINGHAM – On Thursday, Framingham Mayor Yvonne Spicer attending a ribbon cutting ceremony for the opening a new Xfinity Store by Comcast on Route 9.

Her office Tweeted out a photo and wrote “happy to be a part of the first Xfinity Store in Metrowest!”

But there is an Xfinity Store within walking distance of the mayor’s office at the Memorial Building in downtown Framingham.

And the store is owned by the family of one of the mayoral candidates Spicer defeated in 2017. Former mayoral candidate Priscila Sousa’s family has owned Framingham’s first Xfinity store since before nomination papers for Framingham First mayor were available.

“My family and I are proud to serve our neighbors at Framingham’s first Xfinity Store. Serving the community is something we have always done with great pride and we have had the privilege of doing it from 100 Concord St. since April of 2017. It’s about much more than just selling cable and internet, it’s about connecting with all out neighbors from Couburnville to Nobscot,” said Luciana Sousa in an email to Framingham Source.

“It’s about showing people a friendly face when they are trying to figure out what service package is best for their family’s needs, to find a solution when their bill is too high and answer questions when they want to understand more about their services,” said Sousa. “We know Xfinity the big company, but we also know our community. We understand that families come in different shapes and sizes and come to us with different needs.”

“We made a conscious decision to open our business in Framingham because this is home,” sad Sousa, whose daughter ran for Framingham Mayor last year, as a Brazilian-American.

“With over 20 years in this community, we are well aware it is not easy to keep a business open here but we are proud to be a part of Downtown Framingham,” said Sousa.

“This past summer much was said about making Framingham friendly for businesses like ours and we truly hope we can count on the local government to have our back,” said Sousa.

The Mayor’s office deleted the Tweet sometime tonight after 6.

Photo is a screen shot of the Tweet before it was removed. 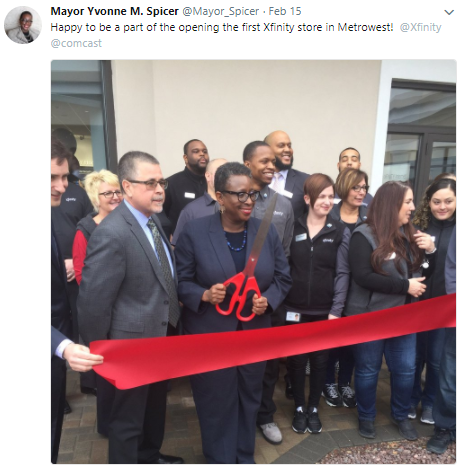