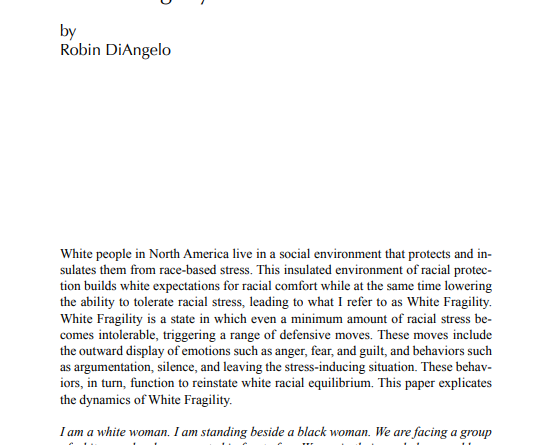 Review of a paper Titled “White Fragility” authored by Robin DiAngelo and published in the International Journal of Critical Pedagogy Vol 3 (3) pp 54-70.

Founder of MetroWest Showing Up For Racial Justice

“‘White Fragility is a state in which even a minimum amount of racial stress becomes intolerable, triggering a range of defensive moves. These moves include the outward display of emotions such as anger, fear, and guilt, and behaviors such as argumentation, silence, and leaving the stress-inducing situation. These behaviors,
in turn, function to reinstate white racial equilibrium. Racial stress results from an interruption to what is racially familiar. These interruptions can take a variety of forms and come from a range of sources”

This is a 17 page (A4 Aerial 12) paper published in the peer reviewed international journal. It has 54 references / citations which is somewhat heavy for a 17 page paper. The paper is not a lucid read like the book “One Two Three … Infinity: Facts and Speculations of Science” by George Gamow, a theoretical physicist, who explored some fundamental concepts of mathematics and science written at a level understandable by middle school students up through “intelligent layman adults”. George Gamow even goes into Cantor’s three levels of infinity.

Robin DiAngelo is following up with a 197 pages book with the same title to be published in June 2018.

White Fragility in simple terms is the state of white people when they cannot tolerate any discussion on race. The author uses the phrase “in the U.S. society” numerous times throughout the paper, and that is quite important.
After going thru the definition of White Fragility and the underlying concepts, the author divides the paper into several sections.
[1] Triggers
[2] Factors that inculcate White Fragility
[2.1] Segregation
[2.2] Universalism and Individualism
[2.3] Entitlement to racial comfort
[2.4]Racial Arrogance
[2.5] Racial Belonging
[2.6] Psychic Freedom
[2.7] Constant messaging that ‘we are more valuable’ thru representation in everything
[3] What does White Fragility Look Like?
[4] Conclusion

The paper is worth reading and I plan to organize a group reading event which will discuss the contents of the paper.

The paper is available on the MetroWest Showing Up for Racial Justice (SURJ) Facebook group in the files section.

Quotable Quotes from the paper.

‘In a white supremacist context, white identity in large part rests upon a foundation of (superficial) racial toleration and acceptance. Whites who position themselves as liberal often opt to protect what they perceive as their moral reputations, rather than recognize or change their participation in systems of inequity and domination. In so responding, whites invoke the power to choose when, how, and how much to address or challenge racism. Thus, pointing out white advantage will often trigger patterns of confusion, defensiveness and righteous indignation.

When confronted with a challenge to white racial codes, many white liberals use the speech of self-defense (Van Dijk, 1992).’

‘A large body of research about children and race demonstrates that children start to construct ideas about race very early; a sense of white superiority and knowledge of racial power codes appears to develop as early as pre-school (Clark,1963; Derman-Sparks, Ramsey; Olsen Edwards, 2006). Marty (1999) states
“As in other Western nations, white children born in the United States inherit the moral predicament of living in a white supremacist society. Raised to experience their racially based advantages as fair and normal, white children receive little if any instruction regarding the predicament they face, let alone any guidance in how to resolve it. Therefore, they experience or learn about racial tension without understanding Euro-Americans’ historical responsibility for it and knowing virtually nothing about their contemporary roles in perpetuating it (p. 51).”’