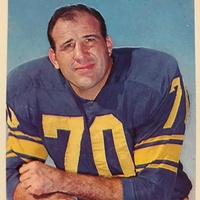 He was the beloved husband of Mitzi (Durock) Varrichione.

Born in Natick, on January 14, 1932,  he was the son of Joseph Varrichione and Mary Grace (Zugale) Varrichione.

The youngest of 10 children, he was the cherished brother of Louise, Pat, Carmella, Netta, Tony, Betty, Annie, Francis, and Mario, along with a long list of nieces and nephews, cousins and second cousins. He was a generous friend to all who met him and he never said no to anyone in need.

Varrichione is a celebrated professional football player. He was a graduate of Natick High School and was a 4 -year starter for the Notre Dame University football team.

In 1955 he was a first round draft pick and was chosen by the Pittsburgh Steelers.  He played 11 years of professional football as right offensive tackle and retired from the Los Angeles Rams as the offensive captain.

Varrichione played in five pro-bowl games including his rookie year.

Varrichione was inducted into the Natick High School Athletic Hall of Fame, the Boston Chapter of the Italian-American Sports Hall of Fame and was selected for the right tackle position to the Pittsburgh Steelers All-Time Legends team as well as a Steelers Hall of Famer.

His greatest joy came from the 64 years he spent with his wife Mitzi. Together they shared the comfort of family and cherished all the times their family came together to celebrate their devotion. They could always count on him to sing love songs to his wife at every gathering and learned from him what it meant to be a good and honest man. He did it his way.

At the family’s request, there will be no visiting hours.

In honor of this great man, donations can be made to Saint Tarcisius Church, 562 Waverly St., Framingham, MA 01702