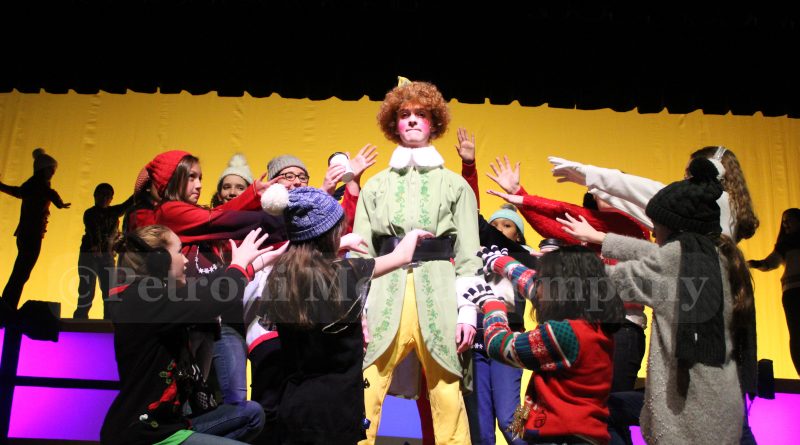 FRAMINGHAM – “The best way to spread Christmas Cheer, is singing loud for all to hear.”

That is the mantra of Buddy the Elf, made famous my Will Ferrell, on the big screen.

And this weekend, Buddy the Elf, comes to life at Cameron Middle School in his musical production Elf Jr, directed by Teri Shea.

Opening night is Friday at 7.  There are two more shows on Saturday at 3 and 7 p.m. Tickets can be purchased in advance for $10 at www.showTix4U.com or at the school before each shows for $12. Friday night’s show is almost sold out. Tickets for Saturday’s shows are also limited.

The 90-minute theatre version is based on the 2003 movie Elf.

Synopsis: “Buddy, a young orphan, mistakenly crawls into Santa’s bag of gifts and is transported to the North Pole. The would-be elf is raised, unaware that he is actually a human, until his enormous size and poor toy-making abilities cause him to face the truth. With Santa’s permission, Buddy embarks on a journey to New York City to find his birth father and discover his true identity. Faced with the harsh reality that his father is on the naughty list and that his half-brother doesn’t even believe in Santa, Buddy is determined to win over his new family and help New York remember the true meaning of Christmas.”

Jake Cahn has the lead role of Buddy.

The musical features more than 50 students from Cameron Middle, plus dozens of elves from the community.

And while you won’t pass through the “seven levels of the Candy Cane forest, through the sea of swirly-twirly gum drops,” you will be transported to a family-friendly holiday adventure.

High-resolution photos are available for purchase by emailing petronimedia@gmail.com Framingham Source will publish a second slideshow from Petroni Media Company after this weekend’s shows are completed.