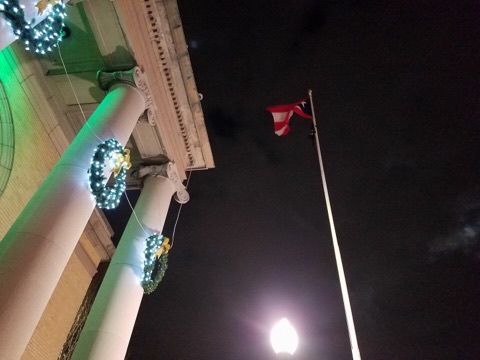 FRAMINGHAM – Looking to support those still dealing with the aftermath of the one-two hurricane punch of Irma and Maria, Framingham residents gathered on the steps of the Memorial Building tonight, November 30, to raise the Puerto Rican flag in solidarity.

Scores of resients from Framingham attended the event.

Torres, a volunteer with the American Red Cross, was on the island and in the Carribean before and after the hurricanes helping victims.

The flag will fly over the Memorial Building for a week, said Ruiz.

Ruiz and Torres earlier held drives of donations to help those on the island. Cristina Sandanza-Donovan, an employee of the Framingham Public Schools, also conducted a drive in Framingham, as did several Framingham firefighters.