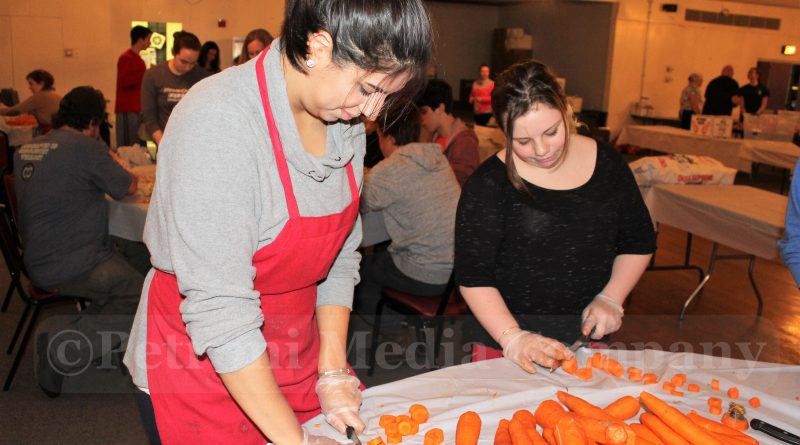 FRAMINGHAM – For the 29th time, scores of volunteers were at Eagles Hall on Park Street in Framingham tonight, November 22, helping to prep for the annual Curtis Family Thanksgiving dinner.

Thursday, from noon to 6 p.m., the Curtis Family will serve Thanksgiving dinner to any one who wants a meal – no questions asked.

There will also be volunteers delivering meals to seniors citizens and others who can’t get to the hall.

Volunteers are still needed after 4:30 p.m. for a couple of hours to clean up, said Diane Lynch.

Tonight, volunteers ranged from elementary school students to senior citizens. There were politicians and families who volunteered to peel, cut, and chop vegetables.

Members of the Framingham High girls and boys swim teams, with goggles on, chopped onions.

Members of the Framingham High National Honor Society were helping out, as were students from the Christa McAuliffe Charter School. Boy Scouts, from Pack 78, at the United Methodist Church in Framingham, as well as Framingham Girl Scouts, with their leaders, volunteered their time.

Karen and Mark Curtis started this event 29 years ago. Tomorrow, more than 2,000 meals will be served.

Curtis, showed Girl Scouts from Troop 72082 some of the Thanksgiving cards she saved, that the Troop made for seniors and veterans when they were Brownie Scouts years ago. The girls are now juniors at Framingham High.

Lynch said she had far more volunteers than she needed, but was thankful for all the support. She said ever since Mark and Karen Curtis were honored at the Salute To Framingham, a call for volunteers has not been needed.