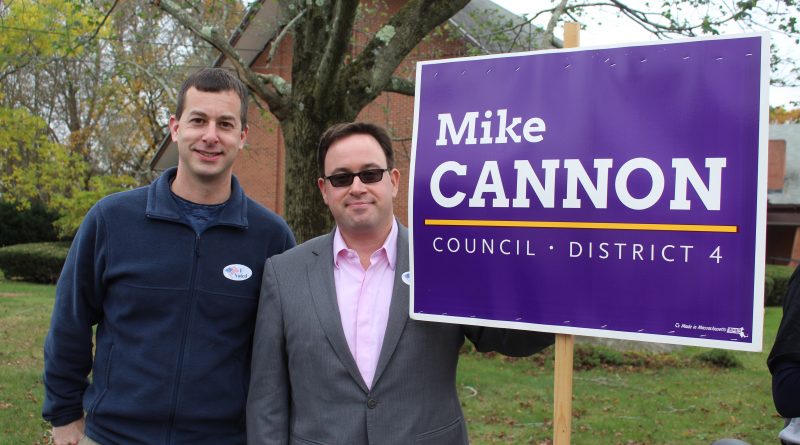 “I am humbled and honored to have the opportunity to serve on our first City Council,” said Cannon this morning to Source. “As nearly every major issues facing Framingham will touch the new District 4, it is important that we work together to move our neighborhoods forward.”

Cannon said he was “looking foward ro working with Mayor-elect Spicer and Adam Freudberg on our School Committee, our other City Councilors, and the thousands of resident of District 4.

“Thank you to Amanda Shepard for running a positive campaign, which highlighted a number of issues deserving greater attention in our community disalogue,” said Cannon.

“Thank you to everyone who has taken the time to share a thought, an idea, or a concern with me over the pas several months,” said Cannon.  “Many of the best ideas for our eighborhood will originate within our community, and I’m easger to collaborate with our community on the myriad of issues and opportunities facing Framingham and District 4. Thank you for your guidance, your encouragement, and your support. Now let’s get to work.”

“I am grateful for the chance to serve on our new city’s first School Committee. Thank you to my wife Nicole and three kids for supporting me! As a first time candidate it was quite the experience to vote with my family and have my kids see my own name on the ballot,” said Freudberg to Source last night.

“I believe we are never done when it comes to issues such as student achievement, educator support, special education, and school infrastructure. We now have a unique opportunity to reset the way we as elected officials lead the way. Collectively with Mayor-Elect Spicer and the incoming City Council we must take our dedicated and quality school system to an even better place. We need to work collaboratively and seek continuous improvement with measurable progress so all of our students have the tools they need to become career and life ready. I cannot wait to begin,” said Freudberg.

Yvonne Spicer, who is a vice president at the Museum of Science in Boston, was elected Framingham’s first mayor easily with 9,129 votes. John Stefanini received 6,455 votes. Spicer received 58 percent of the vote compared to Stefanini’s 41 percent.