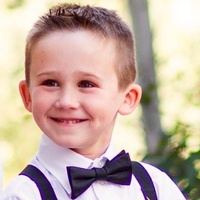 FRAMINGHAM – On October 20, 2017, in his home in Framingham, Massachusetts and surrounded by his loving brothers, his mother and his father, 6 year-old Devin Suau lost his battle against DIPG, passing into the loving arms of his grandmother.

There are many ways to define what it is to be a superhero.

Through his courage and strength, he led us to believe that each day is a blessing and an opportunity to create lasting memories.  He taught us to cherish what you love, to live for each moment, and to be grateful for it all.

From the day he entered this world on October 27, 2010, it was clear that Devin was a symbol for hope and happiness, lighting up the lives of all those around him.  Simply put, Devin was magical.

A hilarious, quick-witted, kind and gregarious little boy, he would walk into any room and light it up with smiles and laughter and joy all around.  It was impossible to know Devin and not to feel warmth in your heart.  Even when first faced with the seemingly insurmountable challenge of pediatric brain cancer that changed the course of his young life, he stood toe-to-toe, fearless and confident that he would be the face of change.  And oh how he was.  Through #whynotdevin, the DIPG awareness movement that reached around the globe, he became and remains the face of hope for all of us.

In just nine months, he touched tens of thousands of lives and shined a light on a terribly underfunded and unknown cancer.  Because of Devin, we are closer to finding a cure for DIPG.  We will continue to shine a bright light on this cancer in hopes that his fight will be one of the last.  Devin taught us “you are always in the fight,” and that fight, like Devin’s light, lives on.  Devin loved our police officers, our protectors, our superheroes, and especially the Green Lantern, which is fitting, because Devin was our superhero, and now he protects us all.  We were looking for a miracle, and there he was.

Devin is survived by his loving parents, James and Christine Suau, his beloved brothers Colin, Owen and Brenden Suau, all of Framingham, MA; his maternal grandparents Alex and Beverly Soutter of Harrison, ME, and Wayne and Laurie Allen of Bridgton, ME; his paternal grandparents Tony and Kate Suau of Floral Park, NY; his Aunts and Uncles David Soutter and Justin Cremins of Boston, MA, Ryan and Lisa Soutter of Erie, CO, Jaime and Greg White of San Antonio, TX, Ryan Kosiba of San Antonio, TX, Tony and Lisa Suau of Garden City, NY, Amy and Mark Biggins of Merrick, NY; and an incredibly wonderful number of cousins and other relatives who loved Devin deeply and friends who have joined Devin’s fight to cure DIPG.

Devin is predeceased by his maternal grandmother Mary Therese Allen, who welcomed Devin home and watches over us all.

Visiting hours will be held Monday, October 23, 2017, for friends of Devin and children who want to say goodbye to our superhero, from 1-3pm, for Devin’s Army and our wonderful community, from 4-6p.m., and for Devin’s family, from 6-8 p.m., all at St. Anselm Church, 100 Landham Rd. in Sudbury, Massachusetts.

There will be a funeral Mass for family and friends celebrated on Tuesday, October 24, 2017 at 10 a.m., also at St. Anselm Church.

The Suau family has entrusted the Norton Funeral Home, Framingham with the care and services of Devin.

In lieu of flowers, please pay forward the kindness and love that embodied Devin, tell someone you love them and be grateful for their love in return, and if you can make a donation, please send them to #whynotdevin, P.O. Box 755, Framingham, Massachusetts 01701.

All donations will serve as the initial funding for Devin’s own foundation, which will be dedicated to shining a light on DIPG, finding its cure, and ending its devastation once and for all