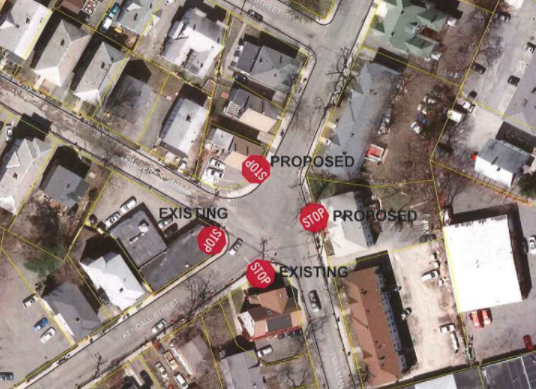 A request was made for stop signs to be installed at the intersection of Kendall, Freeman, and Frederick streets in downtown Framingham to make it a 4-way stop controlled intersection, said Town Engineer Eric Johnson.

The request supports mitigation for a new development at 75 Concord Street, explained Johnson to Selectmen.

The improvements will include geometric improvements to address increased traffic generated by the new development.

The Town of Framingham engineering department and the Framingham Traffic and Roadway Safety Committee also supported the new stop signs.

The $60 million proposal would be located at the corner of Concord and Howard streets. A church, parking lots, a warehouse and vacant storefronts would be demolished so the 5-story apartment building could be constructed.

The estimated investment in downtown would be $73 million. The tax break, approved by Town Meeting, was for $5.9 million.