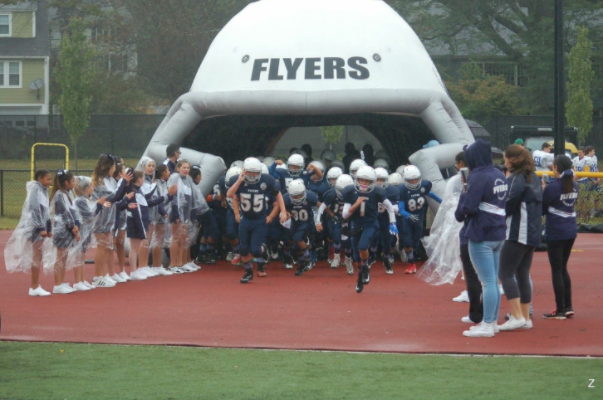 BY: Daniel Keefe and Max Stevelman

To start off the game, Framingham fumbled and immediately gave Norwood the ball. It was wet, slippery, and cold from all the rain. It felt like there was a third team on the field, not what was expected.

Norwood marched down all the way to the one yard line, but Framingham wouldn’t let them score. They held them on a fourth and goal, which gave Framingham the ball at their own one.

With a bad snap, Framingham’s quarterback Max Stevelman was forced to fall on it to give Norwood 2 points.

The one thing is, they didn’t score.

Framingham threw an incomplete pass forcing a turnover and put their trust in the Framingham defense.

To start the second half, nothing changed.

The defenses were back and forth, rain still coming down, and both offenses not getting anything going; fumbles, interceptions, turnovers. It was a defensive show.

Framingham’s defensive linebacker Willard Claude was on fire and had numerous hits, not only on the QB but the Running Backs and Wide Receivers too.

With 3 minutes left in regulation, the Framingham offense was on the Norwood 10.

On 4th and 2 Max Stevelman runs to the left, jukes one man, breaks a tackle and gets into the endzone for the touchdown. Framingham then looked for 2 points from their kicker Caiden Whitney. The kick is up and it is good.

Now Norwood has the ball on their own 30 yard line and the Framingham defense is looking for an big stop. On 3rd and 7 Norwood gives a terrible snap to give Framingham the ball and run the clock.

After Framingham goes 3 and out, the punter Caiden Whitney, makes a perfect punt that puts the ball at Norwood’s own 1 yard line. Framingham holds them to win the game.

Even though Framingham was trailing most of the game, they kept their heads held high and stayed positive throughout the game.

Report and photo submitted to Source