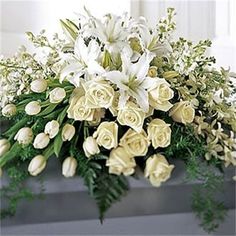 FRAMINGHAM – Gwendolyn May (Hodgdon) Collins, 85, of Framingham, died peacefully at home surrounded by her family on Wednesday, August 30, 2017.

She battled, with strength for 21 years with Multiple Myeloma.

Born in Framingham, she was the daughter of the late Royal M. and Gracie I. (Stowell) Hodgdon.

Collins worked at the First National Grocery Store for several years until their closing, after she worked for many years at the Stop and Shop Grocery Store.

She was involved in the Framingham Grange for 50 years, Fairs ‘N Squares and she loved camping with her family.

She was a longtime parishioner of St. George Church. She was a wonderful devoted mother, grandmother, great grandmother and sister who cherished her family. Which also included many nieces, nephews and cousins.

Relatives and friends are invited to attend her funeral Mass on Wednesday September 6, at 10 a.m. in St. George Church, 75 School St., Framingham.

Visiting hours at the Norton Funeral Home, 53 Beech Street in Framingham will be Tuesday, September 5 from 5 to 8 p.m.

In lieu of flowers, donations in her memory can be made to the MetroWest Cancer Care Center, 99 Lincoln Street, Framingham, MA 01702.