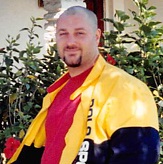 Born in Framingham to William A. & Maureen F. (Hogan) Carey who survive him, he is the loving husband of Melissa M. (Plasse) Carey.

He  was the oldest of four, and grew up in Framingham where he played Pop Warner football, little league, and basketball.

Known to all as having a heart of gold, Billy loved everyone, and certainly kept them entertained with his sense of humor.

A loving husband to Melissa, and a devoted son to Bill & Maureen, he is also survived by his two sons, Steven A. & Joseph William, his step son, Kish all of Framingham, his siblings, Marc S. & his wife Betty of TX, Jodi Tognacci & her husband Mark of Framingham, and Robyn McEvoy & her husband Matt of Framingham, his nieces, Amanda, Kylie, Kristina, and Stella, his father-in-law, Joseph Plasse of FL, and many aunts, uncles and cousins. He was predeceased by his grandparents William & Anita Carey, Kenneth Hogan and Beatrice Hogan Madden, and his mother-in-law Paula Plasse.

Family and friends will honor and remember his life by gathering for his Funeral Mass on Tuesday morning, May 23 in St. George’s Church, 74 School St., Saxonville, at 10 a.m. Interment will be private.

In lieu of flowers remembrances may be made in his name to the Veterans Charity of your choice.

Photo courtesy of the funeral home