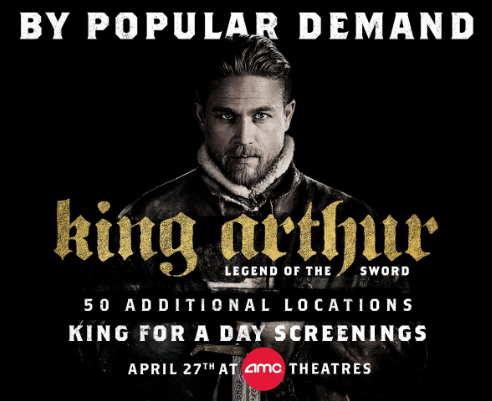 FRAMINGHAM – AMC Theatres and Warner Bros. Pictures have expanded the list of theatres participating in a free advanced screening of Guy Ritchie’s King Arthur: Legend of the Sword, to include Framingham.

More than 200 theatres nationwide now will offer the “King for a Day” free screening on Thursday, April 27, at 7 p.m.

The promotion, announced earlier this week at 150 AMC locations in the United States, allows guests to visit AMCKingForADay.com to find their participating AMC and reserve two tickets to see this summer’s highly-anticipated actioner film.

The movie officially debuts in theatres in North America on May 12.

The free admission to the event, through AMCKingForADay.com, is first-come, first-serve, while supplies last.

Starring Charlie Hunnam in the title role, the film is an iconoclastic take on the classic Excalibur myth, tracing Arthur’s journey from the streets to the throne.

Then the child Arthur’s father is murdered, Vortigern (Jude Law), Arthur’s uncle, seizes the crown. Robbed of his birthright and with no idea who he truly is, Arthur comes up the hard way in the back alleys of the city. But once he pulls the sword from the stone, his life is turned upside down and he is forced to acknowledge his true legacy…whether he likes it or not.

The film has been rated PG-13 by the MPAA for sequences of violence and action, some suggestive content and brief strong language.