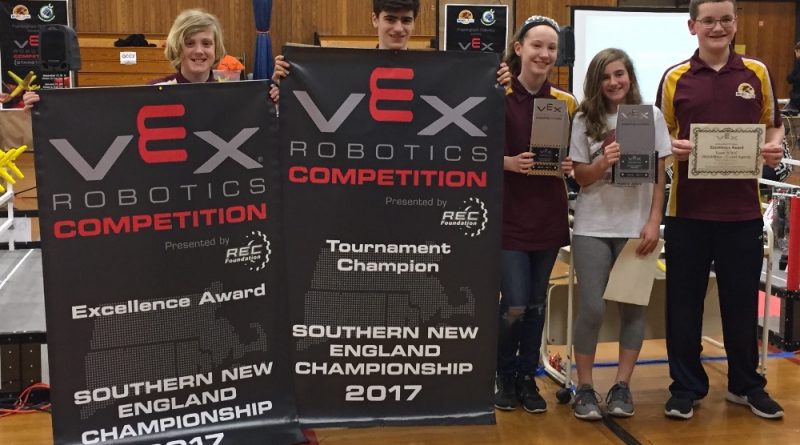 FRAMINGHAM – Two robotics club teams from Framingham have qualified for the  VEX Robotics World Championships later this month in Kentucky.

The Walshbots are now fundraising to defray the cost of lodging and transportation to the event, said advisor Pascal Chesnais.

Today, Sunday, April 2 the two Walsh Robotics Club teams will be at the Stop & Shop Old Connecticut Path from 9:30-3:30 p.m.  with demo robots, and some items to exchange for donations (buttons, car magnets and frisbees).

“I have the privilege of being surrounded by very talented middle school students who are developing critical thinking, engineering, leadership, and teamwork skills by participating in VEX Robotics Competitions in the region. We have seven active competition teams and this year two teams, 9791C C-cret Agentz and 9791H Hangman, have qualified for VEX World Championships in Louisville, KY April 19-23,” said Chesnais.

“Getting 14 students and three staff members to this prestigeous event where over 800 teams from 35 countries will be competiting requires more financial resources than we have available to us,” said Chesnais.

“These students meet three times a week for three hours a week all year long. The results have been outstanding, with the teams earning 13 judged and performance awards at six regional competitions, including the most coveted Excellence Award and two teams on the Tournament Champions alliance at the Southern New England Middle School Regional Championships,” said Chesnais.

There is also a GoFundMe started to help the two teams, said Chesnais.