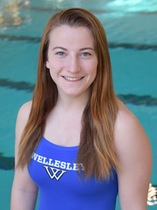 With her second win of the weekend, Sticco-Ivins has qualified for the 2017 NCAA Division III Swimming and Diving Championships and will make her third trip to the national meet, March 15-18, 2017, at the Conroe ISD Natatorium in Shenandoah, Texas.

On Friday, Sticco-Ivins scored 471.80 to win the 1-meter regional title for the third time in her career.