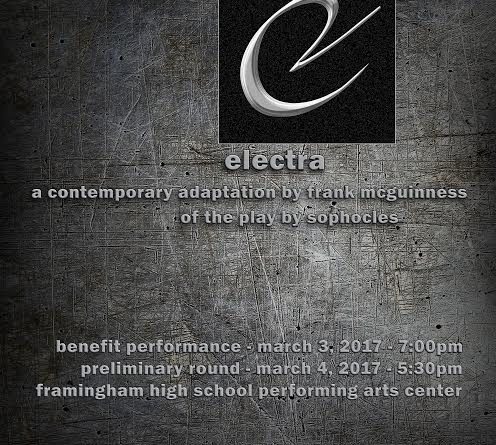 On Friday night, the show produced by Donna Wresinski and Chris Brindley, featuring a cast and crew of 80 students, will stage a benefit performance at Framingham High at 7. Tickets are $10 and can be purchased at www.showrix4U.com

The show is an adaptation of the Sophocles tale by Frank McGuinness.

Framingham will present a modern adaptation of the Greek play, featuring a steampunk design.

Electra Summary: When King Agamemnon returns from the Trojan War with his new concubine, Cassandra, his wife Clytemnestra (who has taken Agamemnon’s cousin Aegisthus as a lover) kills them. Clytemnestra believes the murder was justified, since Agamemnon had sacrificed their daughter Iphigenia before the war, as commanded by the gods. Electra, daughter of Agamemnon and Clytemnestra, rescued her young, twin brother Orestes from her mother by sending him to Strophius of Phocis. The play begins years later when Orestes has returned as a grown man with a plot for revenge, as well as to claim the throne.

Friday night’s benefit performance is a warm up to the drama company’s performance in the METG State Drama festival competition on Saturday.

Last year, Framingham was named a state champion of the 2016 competition out of 114 schools for its production of Sideways Stories from Wayside School.

In the last 14 years, Framingham High has made the state finals of the drama competition 11 times, and won twice.

On Saturday, Framingham High will host a preliminary round of the METG state drama festival competition.

Each of the student-run plays can not run longer than 40 minutes.

Students have a a set amount of time to stage the production and to clear the stage afterwards. If they go over, they are disqualified.