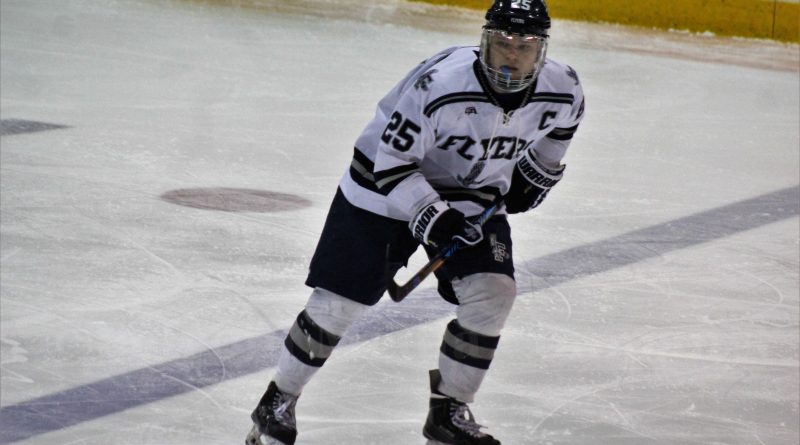 BURLINGTON – The Framingham Flyers boys hockey team topped Chelmsford 3-0 for a solid first round win in the Cahoon Cup in Burlington Tuesday night.

In the second period the Flyers established a strong forecheck peppered the Chelmsford goaltender.

Ben Stefanini got the Flyers on the board with 7:17 left in the second period.  The line of Stefanini, Nichols and Joey MacInnis pinned the Lions in their zone.  Nate Nichols won a puck battle in the right wing corner in the Lions end of the ice.  Stefanini picked up the puck, and walked up and off the right wing boards and snapped a wrist short short side past the Chelmsford goalie for a 1-0 Flyer lead.  Assists to Joey MacInnis and Nate Nichols on the goal.

With 1:17 left in the second period the Flyers extended their lead.  On the power play, defenseman Sam Barnett moved the puck down to forward Michael Tersoni who exchanged passes along the right wind boards with Macinnis.  MacInnis, set up down low in the Lions zone gave the puck back to Tersoni.  Tersoni then moved the puck out to Scott Swennes, whose backhander shot was saved and deflected off to the goalie’s left where Tersoni buried the rebound loose puck for a 2-0 Flyer lead.  The 2nd period ended 2-0 Flyers.  Tersoni and MacInnis with assists on the goal.

With 11:17 left in the 3rd period Swennes added to the Flyers lead.  Swennes picked up a pass from Anthony James in the Lions zone, swung patiently high along the blue line until he had a shooting lane then fire a wrist shot top left corner to put the Flyers up 3-0.

Flyer goalie Alex Moore was outstanding in net for the shutout win.

They will battle Burlington Thursday in the Cahoon Cup Championship at 8:15 p.m. at the Burlington Ice Palace.

Photo from a previous game this year by Petroni Media Company