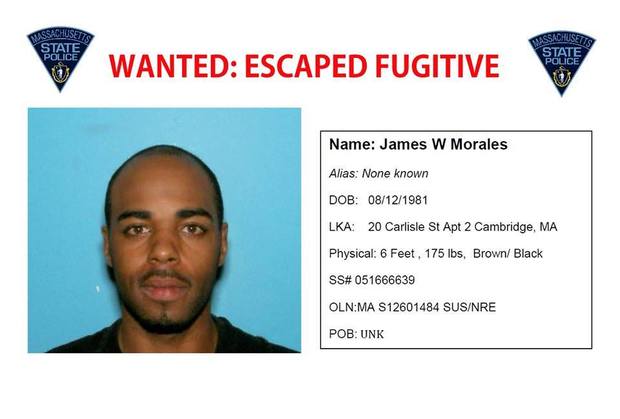 FRAMINGHAM – The Framingham Board of Selectmen today, January 4, issued a statement regarding the search for fugitive James W. Morales who escaped from the Wyatt Correctional Center in Rhode Island on Saturday, December 31, and was spotted in Framingham on New Year’s Day.

The search is being directed by the U.S. Marshall’s Office in Rhode Island with the assistance of the F.B.I and the Massachusetts State Police. The Framingham Police Department is fully cooperating with those lead agencies in the hunt.

“It’s been three days since Mr. Morales was seen in Framingham. At this time the Framingham Police have no reason to believe that the fugitive is still in town; but we also have no proof that he is not. Residents are advised to remain vigilant and to report anything suspicious to our department immediately. The suspect is believed to be armed and dangerous.” stated Acting Police Chief Steve Trask.

Selectmen Chair  Cheryl Tully Stoll said, “Our police department is dedicating substantial resources to this effort, but the direction of the investigation and much of the related communications are being controlled by federal and state authorities. The town is limited regarding what we can do or publicly say to insure that we don’t inadvertently compromise an ongoing federal fugitive pursuit.”

Town Manager Robert Halpin pledged that the police department will continue to receive the support necessary from the administration until this situation is resolved.