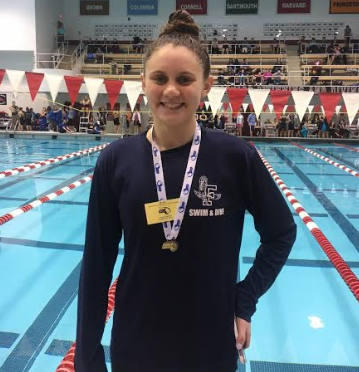 The Framingham High junior won the distance event in 5:14.19 minutes, which isn’t even her fastest time this season.

Last weekend, she won the Division 1 South title in the 500-freestyle with a new Framingham High record of 5:09.57 minutes. It was a repeat for McCurdy, who won the same event as a sophomore.

Yesterday, McCurdy’s closest competitor was Chelmsford junior Naomi Wright, who finished in second place with a time of 5:16.85 minutes, The third place finisher’s time was 5:23.59 minutes.

McCurdy, who also won the Bay State Conference 500-yard freestyle title in October, said she likes the long-distance event because it is “not an all out sprint the whole time, and once I find a good rhythm in my race, I can swim the rest of the race at that same pace.”

At the start of the season in August, McCurdy set a goal to win the state title in the distance event.

The 16-year-old said “swimming all year round, and especially working on the little things during the high school season like turns and coming off of the wall” helped her achieve her goal.

“I don’t think any of this would be possible without the rest of the team cheering me on and pushing me everyday in practice,” said McCurdy, who swim with Shawmut Aquatic Club, in the off-season, now that the high school season is over.

Now that she has accomplished her goal, what’s next for McCurdy?

“Before I graduate, I would like to win states again next year and get as close to the 5-minute mark as I can get,” said McCurdy. “I also would like to get the 200 free school record.”