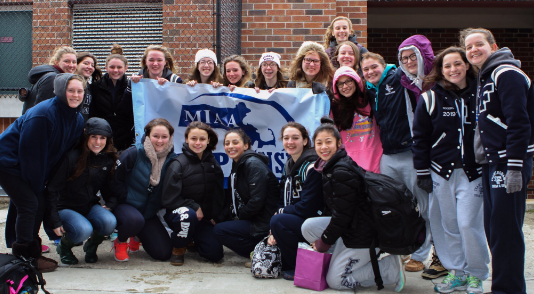 Leading the team to its fourth place finish was a couple of juniors, who won individual state championship titles.

“I’m so happy and proud of McCurdy and Bower for their individual performances today,” said head coach Mike Foley. “They were big individual goals of theirs. And, I and the other coaches were honored to be on deck with each of them, while they accomplished them.”

Another major reason the Flyers finished fourth was due to its quartet of divers. Bower won the state title, but Framingham’s three other divers all finished in the top 7 in the state meet.

“These divers are unbelievable,” said Foley. “We are lucky to have them all here together, feeding off each other and making each other better.”

Bower said she was so happy to see her teammates do so well in the diving competition.

“I am so so so incredibly proud of them,” said Bower. “They have all worked so hard, and to see them do this well at the state meet makes me so happy!”

“I am very happy that she finished her season on such a high note,” said Bower of Fawell.

Team depth has been a factor in the team’s success all season long. 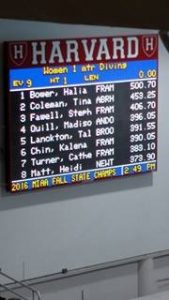 Last weekend, the team won the Division 1 South Championship, for the third time in five years.

Yesterday, while McCurdy won the 500-yard freestyle title, two other swimmers competed in the same event with her. Junior Julia Long finished in 12th place with a time of 5:35.87 minutes, while senior Isabella Tersoni finished in 21st place with a personal best time this season of 5:43.33 minutes.

McCurdy finished third in the state in the 200-yard freestyle with a time of 1:58.38 minutes. Acton-Boxborough senior Madison Ford won the event in a time if 1:55.34 minutes. Freshman Jillian O’Neil finished in 13th place with a time of 2:05.67 minutes. Tersoni finished in 17th place, and Long in 18th place.

Earlier in the meet, Miranda finished 14th in in the 200-yard individual medley at yesterday’s state meet, with a personal best time of 2:22.47 minutes.

Framingham freshman Laryssa Gazda finished 20th in the 100-yard butterfly. Lexington High senior Taryn Waite won the event in 57 seconds. She was the only swimmer to go under a minute.

The Flyers had four swimmers who qualified for the 100-yard backstroke event. Freshman Caroline Mazariegos was the top Framingham swimmer in that event finishing in 11th place with a personal best time of 1:04.38 minutes. Gazda finished 12th, Nelson was 19th and senior Mary Zschau ended her high school swim career 24th in the state meet.

“I’m very proud of the legacy these seniors have left with the program over their years,” said Foley. “Especially, this year, showing this strong freshman class about our teamwork.”