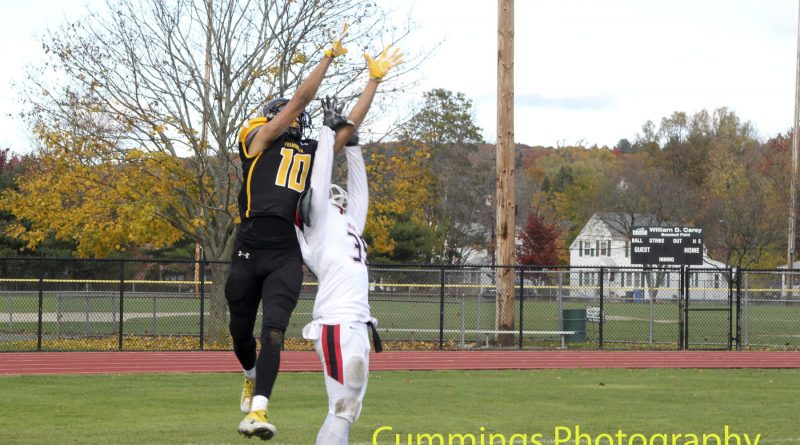 With the win, the Bears, who have won the MASCAC Title for the first time, improve to 7-2 on the year and are now 7-0 in the MASCAC with one game remaining.

The Rams, winners of the first three MASCAC Titles since the MASCAC began football in 2013, are now 6-3 on the year and 5-2 in the league.

Bridgewater State jumped out to a 14-0 lead at the half as they held the Rams to just 98 yards of offense in the first two quarters.  Junior Alex McLaughlin put the Bears on top with 3:38 remaining in the first on a one-yard TD run that capped a 15 play, 70 yard drive.  Garrett doubled the lead in the opening minutes of the second quarter as he scored on a 50 yard QB keeper.

The Rams offense came alive in the third quarter with 14 points to tie the game.  Sophomore Quron Wright returned the second half opening kickoff 41 yards giving the Rams the ball at midfield.  A short completion and a penalty on the Bears set up a 29 yard scoring strike from freshman Adam Wojenski to sophomore Napoleon Miller.

Senior Jaleel Wingard intercepted the Bears Danny Higgins on the ensuing Bears possession to set up the Rams second score of the day – an 11-yard touchdown run from Beahn.

Bridgewater State grabbed the lead back, 21-14, on a 24 yard touchdown pass from Higgins to Garrett with 8:39 left in regulation.

The Rams would tie the game with 2:09 remaining on a 21 yard touchdown pass from Wojenski to junior Mike Calicchio. The key play on the drive was 31 yard completion to sophomore Anthony Smith on a 4th and seven from the Rams 43 yard line.

The Bears had one last possession in regulation and fumbled near midfield with 28 seconds remaining. The Rams recovered the fumble and moved down to the Bridgewater 35 yard line, but could not find the end zone sending the game to overtime.

The Bears amassed 454 yards of total offense in the game to 321 for the Rams including 223 in the second half and overtime.

Wojenski finished the game 17-for-35 for 266 yards and two touchdowns, while Miller finished with seven catches for 119 yards and a score. Beahn was the Rams leading rusher with two TDs on the ground.

Garrett rushed for 124 yards on 23 carries with a pair of scores while also making for catches for 70 yards and a touchdown.  Higgins threw for 205 yards on 33 attempts with a touchdown and two picks.

Defensively the Rams were led by 14 tackles, including 10 solo, from junior Tom Burns, while senior Aaron Owens added 10.

The Rams close out the regular season next Saturday at home when they host Worcester State at noon.